Yoshifumi Nishihara (“Yoshi”) wears many hats. As the second generation owner of Ichiriki Sushi, a sushi restaurant that has been in Itoshima for nearly half a century, he is a sushi chef who aims to provide his customers with the best possible service. But he is also the leader of Kuma Shudan (literally, “bear group”), a group of guys who dress in bear costumes and pay visits to nursery schools, nursing homes and events held near and far. In addition to that, as the self-proclaimed Sekai Ichi no Omoideya (“world’s number one memory maker”), he offers a one-of-a-kind surprise service. And last but not least, he is the owner of Ho To Hana, a ramen shop that makes ramen with sea bream, Itoshima’s local specialty, and which is currently open for a limited time from April until the end of June 2022 on a platform at JR Hakata Station. 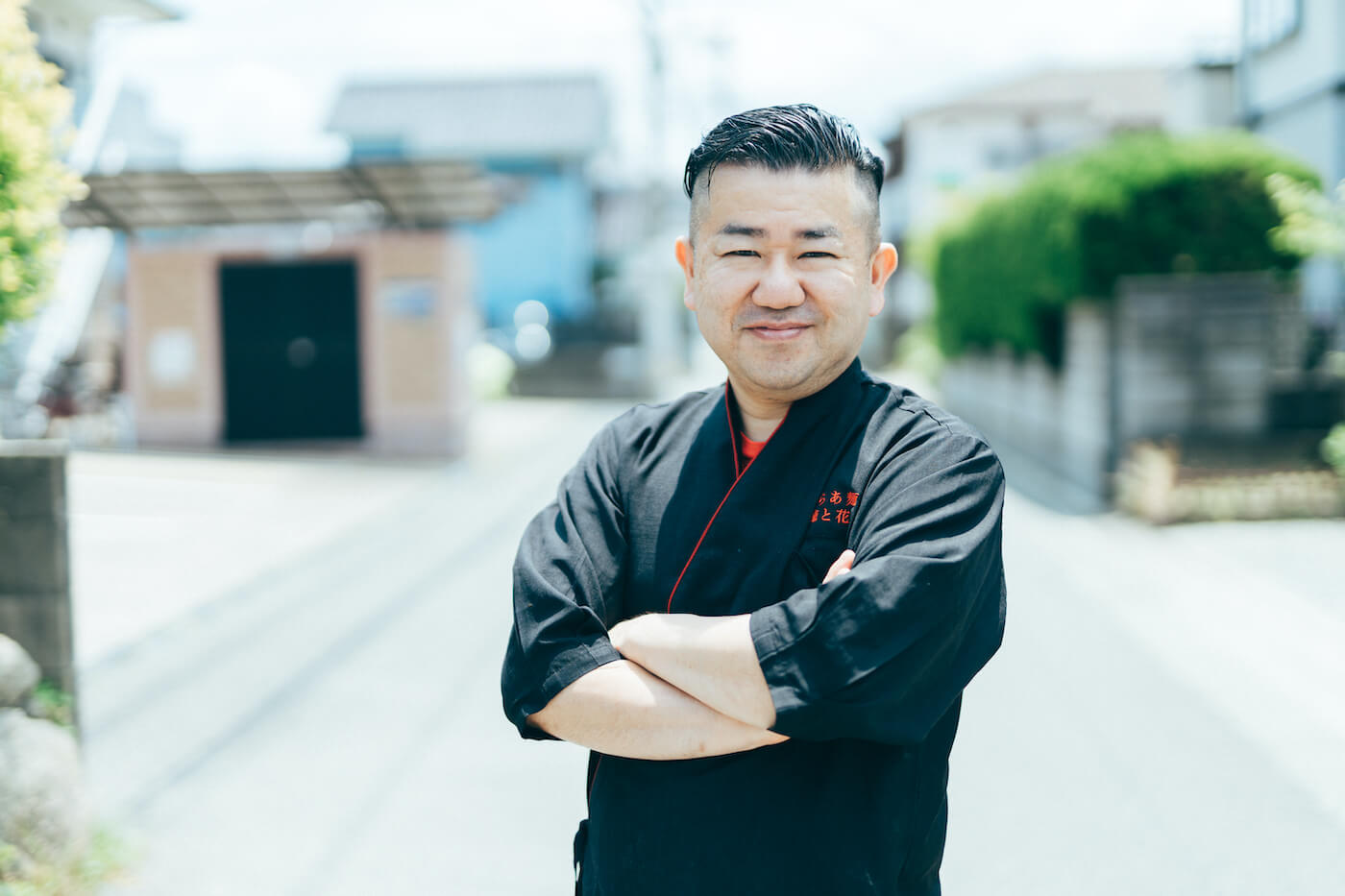 So, Yoshi, what are you exactly: a sushi chef or a ramen chef?

Even I wonder who I am! (laughs) Either way, I give 100% to serve my customers. I want people to feel excitement, and that is something I also seek for myself, so I do a lot of things. 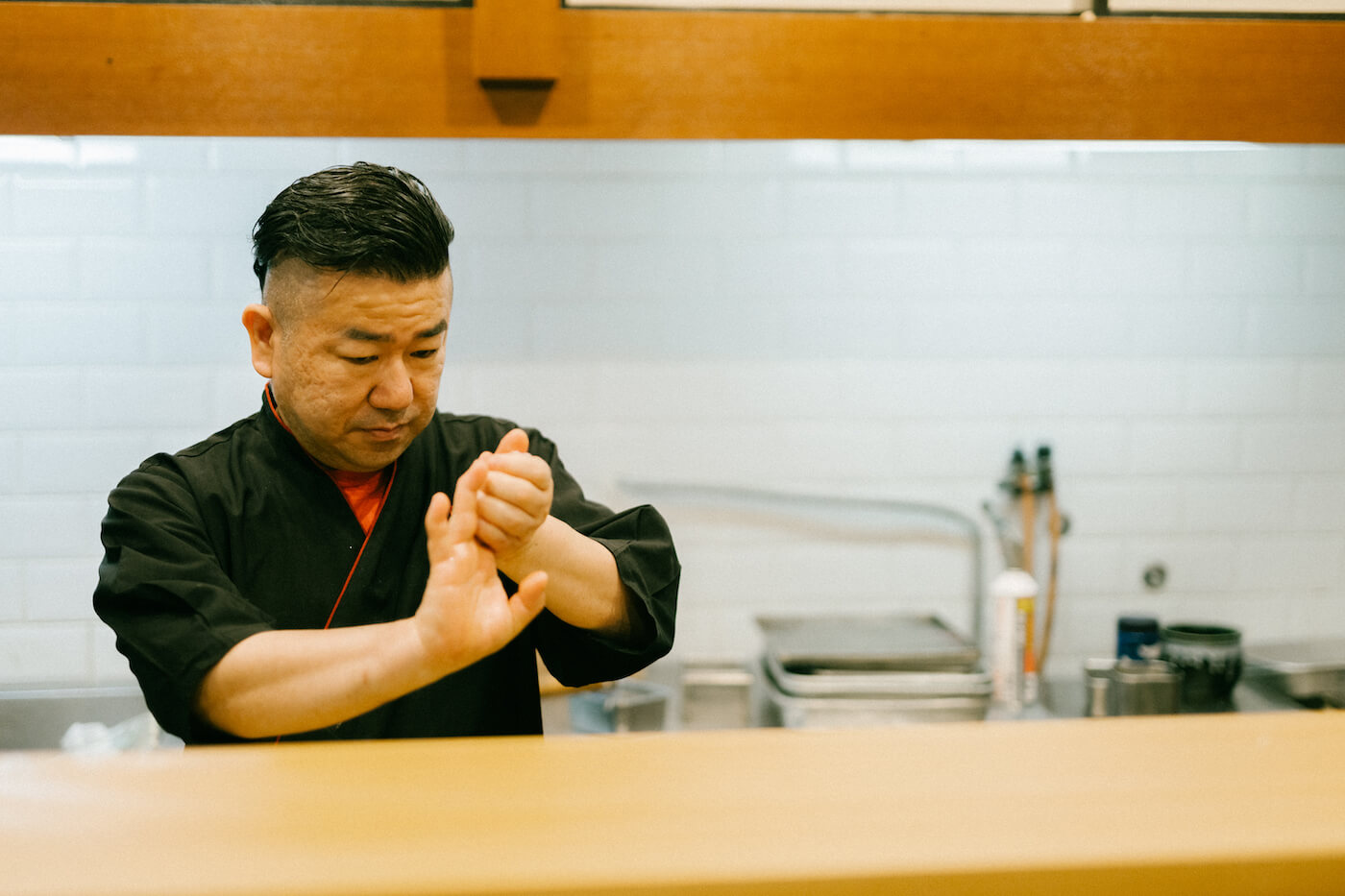 Where does your spirit of service come from?

I guess I learned it when I was a child. In elementary school, I did not take any classes at all. All I did was make flip books and show them off to my friends. I always wanted people to pay attention to me, so I developed a strong service mentality. I am exactly the same person now as I was when I was a young boy. Twenty-four hours a day, 365 days a year, I am constantly thinking about how I make people have fun. 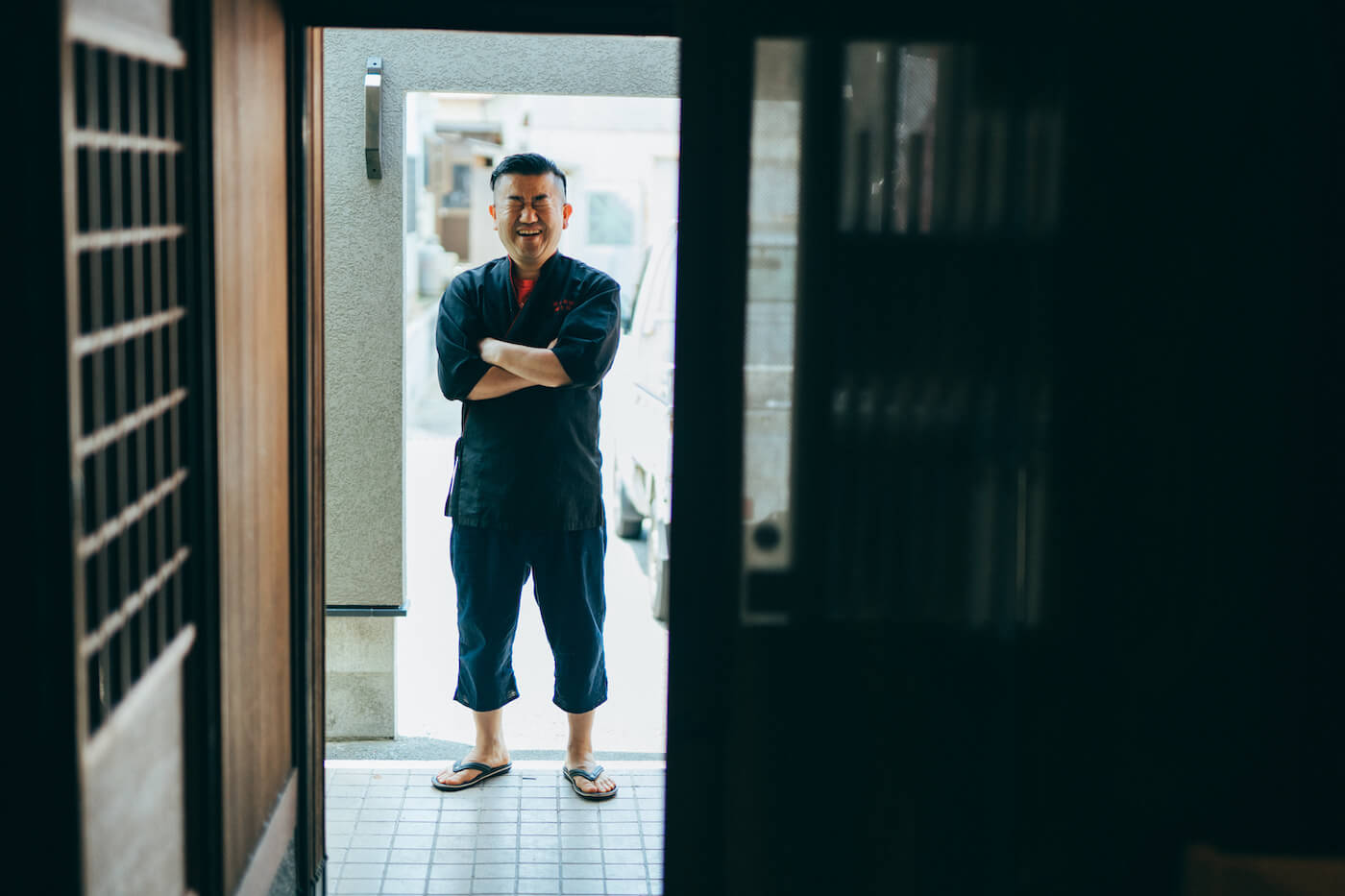 Is the Omoideya an extension of this spirit?

When I returned from my training about 20 years ago, I wanted to make Ichiriki Sushi more popular, so I worked my tail off and ended up getting too busy. I felt like I was going to run myself into the ground if I didn’t change something, so I switched to specializing in delivery and catering and only accepting customers by reservation. I came up with the Omoideya concept to bring in a steady stream of reservations. 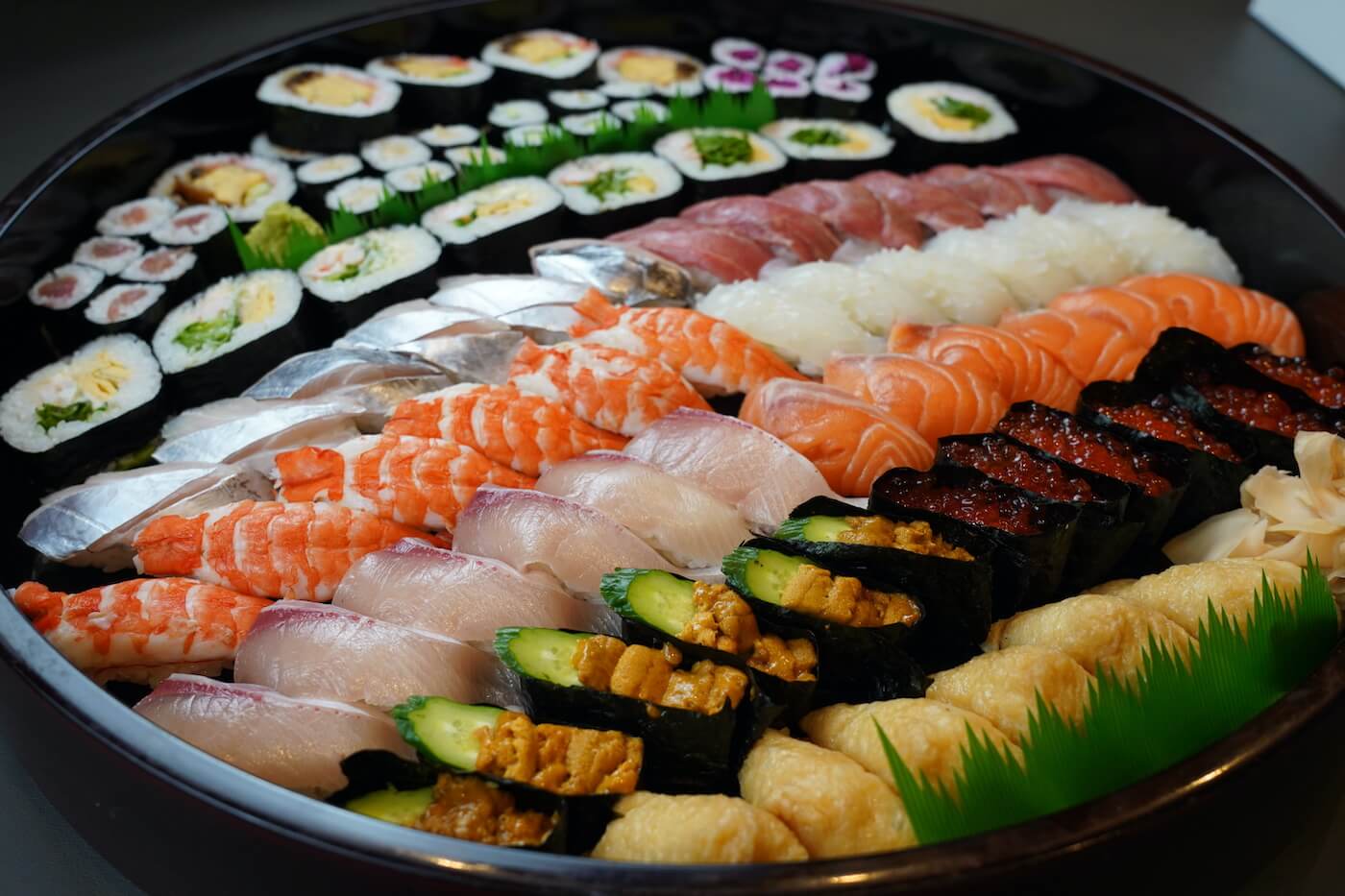 What kind of service do you provide as the Omoideya?

It is a free surprise service for events and celebrations. I don’t charge extra, but I provide my customers with the best gift—something they’ll never forget. One of the surprise services I’m proud of is the Today’s Credits video. Nowadays, they make video summaries of the day’s events and show them at the end of weddings and other events, but when I started doing this, banquet halls had not started offering this service. 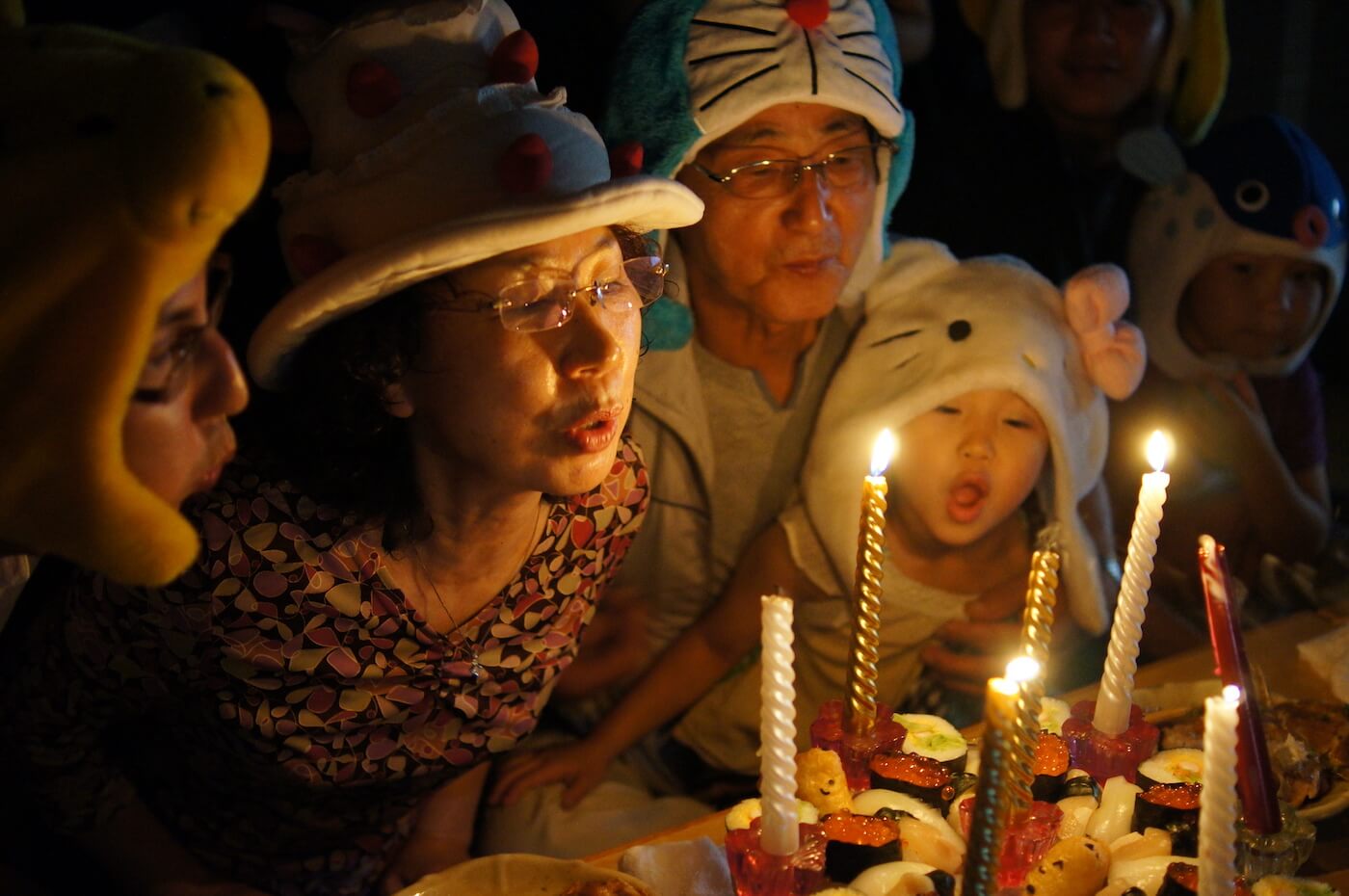 On the days I work as the Omoideya, I make sushi, take pictures, and entertain customers in a bear costume. Then, I use my computer to edit all the photos into the Today’s Credits video. I always fret about whether I will finish in time for the end of the ceremony, but I stay motivated to do my best because I love to see the audience laughing or crying tears of joy when they watch the video. Families with various problems also come to request my Omoideya service. When a father and son who had not spoken to each other for 10 years came to the shop, I had them stand shoulder to shoulder for a picture. When they left, they thanked me by saying, “We are a family again for the first time in 10 years.” I was moved.

I will never forget the person who visited my shop and told me they weren’t expected to live much longer. The whole family came to make one last memory together as a way of saying goodbye. It should have been a somber occasion, but everyone was laughing and trying to make the situation fun. I was crying on the inside, but I kept a smile on my face the whole time. I was so moved that I had to hide my teary eyes behind sunglasses while taking the photo with my camera. I have managed to offer my services as the Omoideya over 3,000 times because I want to keep having these kinds of moving encounters. 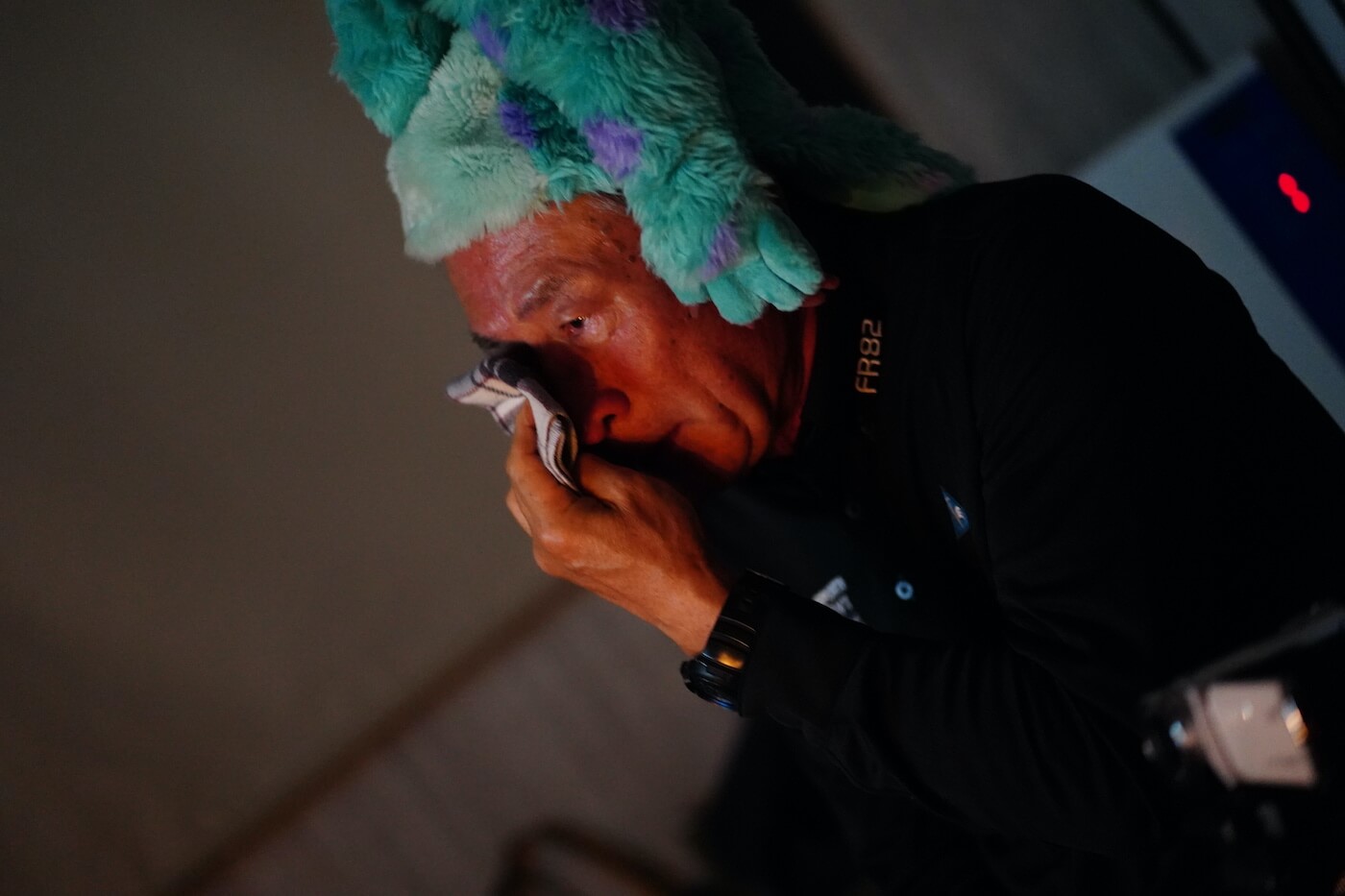 Even before the current Itoshima boom, you were already promoting Itoshima by wearing a bear costume. Tell us about this.

It all started when I took a large stuffed bear, which I named Manager Bear, with me on a delivery. It was a huge bear, so I bought a bear costume because I thought it would be easier to get around if I just wore a costume instead. Since I bought it, I decided to make good use of it, so I dressed as a bear and went to various events designed to reinvigorate Itoshima. Not long after that, another bear joined the crew, and now there are nine of us! One great thing about Itoshima is that there are so many people who are interested in activities like this that may seem strange to most people. We make volunteer visits to nursery schools, elementary schools, and nursing homes. I have no desire to turn this into a business. I just want to liven up the place where I was born and raised. 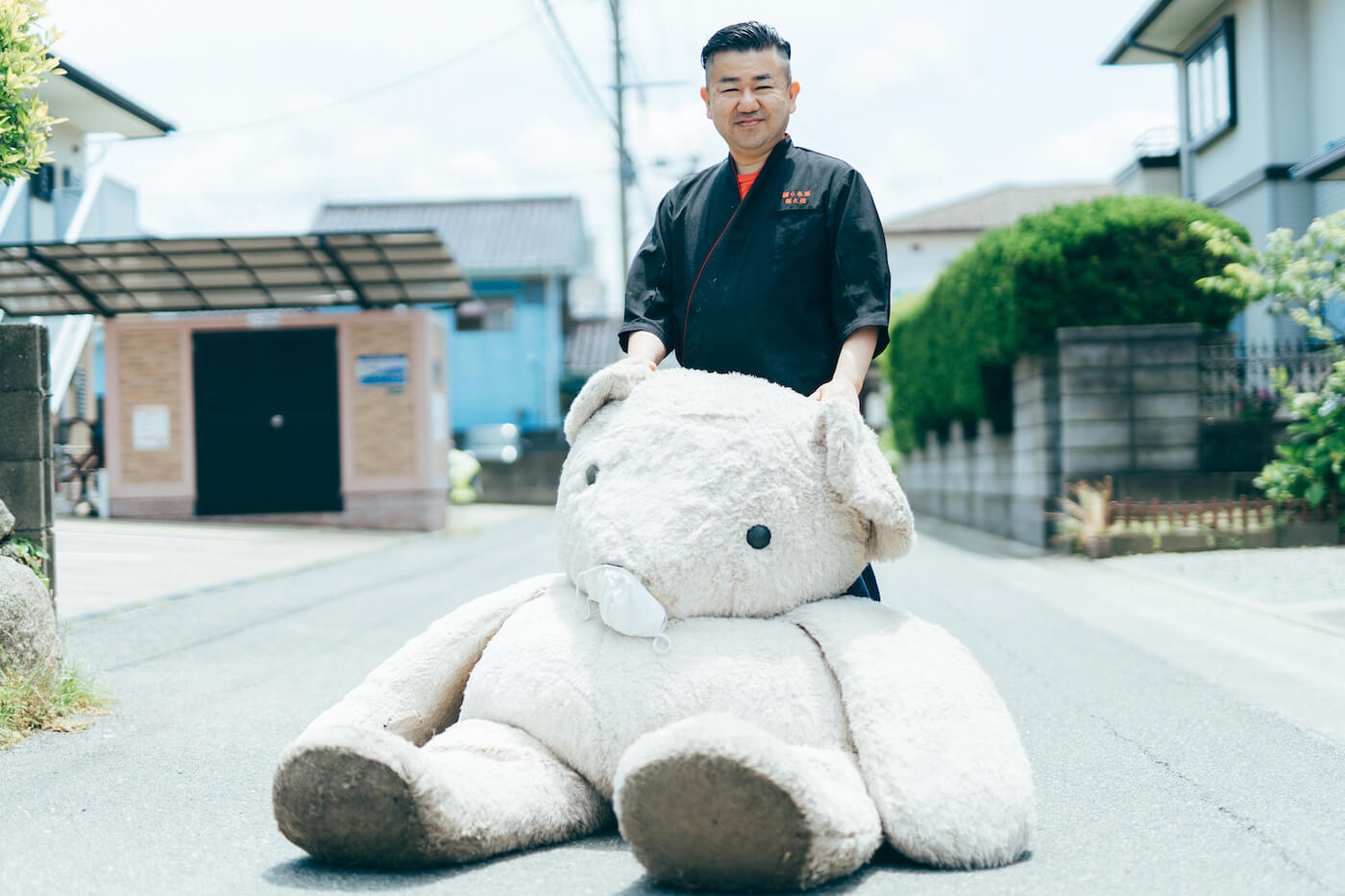 Is your sea bream ramen also one of the ways you contribute to community development?

Itoshima boasts the largest catch of sea bream in Japan, so I thought that if I made ramen using local sea bream, it could become a specialty product. In 2016, when we served sea bream ramen at the Itoshima Citizens’ Festival, we took second place in the Gourmet Grand Prix. However, the soup at that time was too weak, and I was not satisfied with my creation. I kept working to make a richer soup that even fans of Fukuoka’s tonkotsu ramen would enjoy and ended up with another second place finish in the 2019 Gourmet Grand Prix. It was so well received that I decided to open a sea bream ramen restaurant. The name of the restaurant, Ho To Hana, was taken from the names of my two daughters. I wanted to show them how their father was always attempting new things. In April 2022, we will open a shop on a platform of JR Hakata Station. As the station is the gateway to Kyushu, we want to serve up the flavor of Itoshima to visitors from all over Japan. The shop will run until the end of June, which will close the first chapter on my sea bream ramen project. 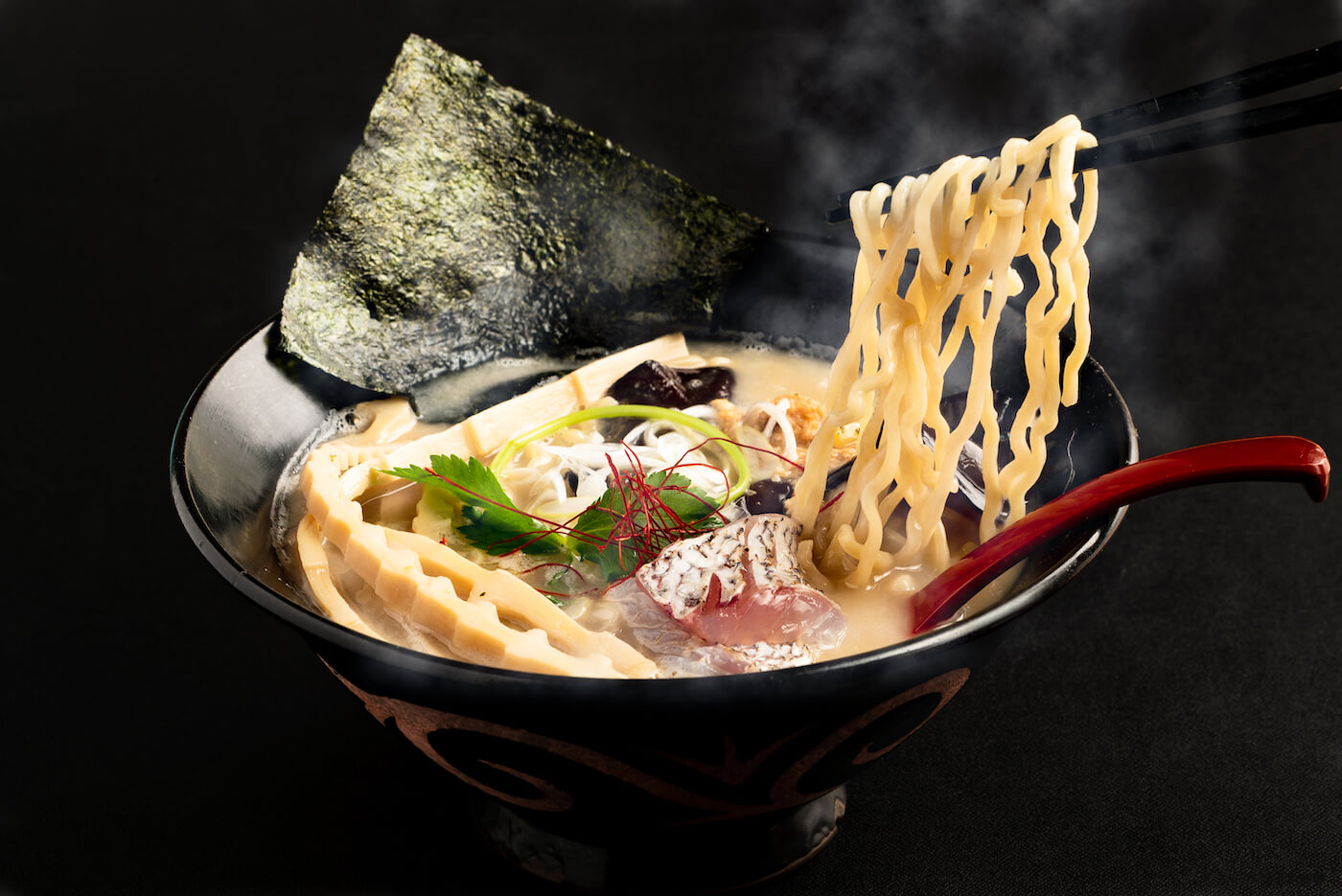 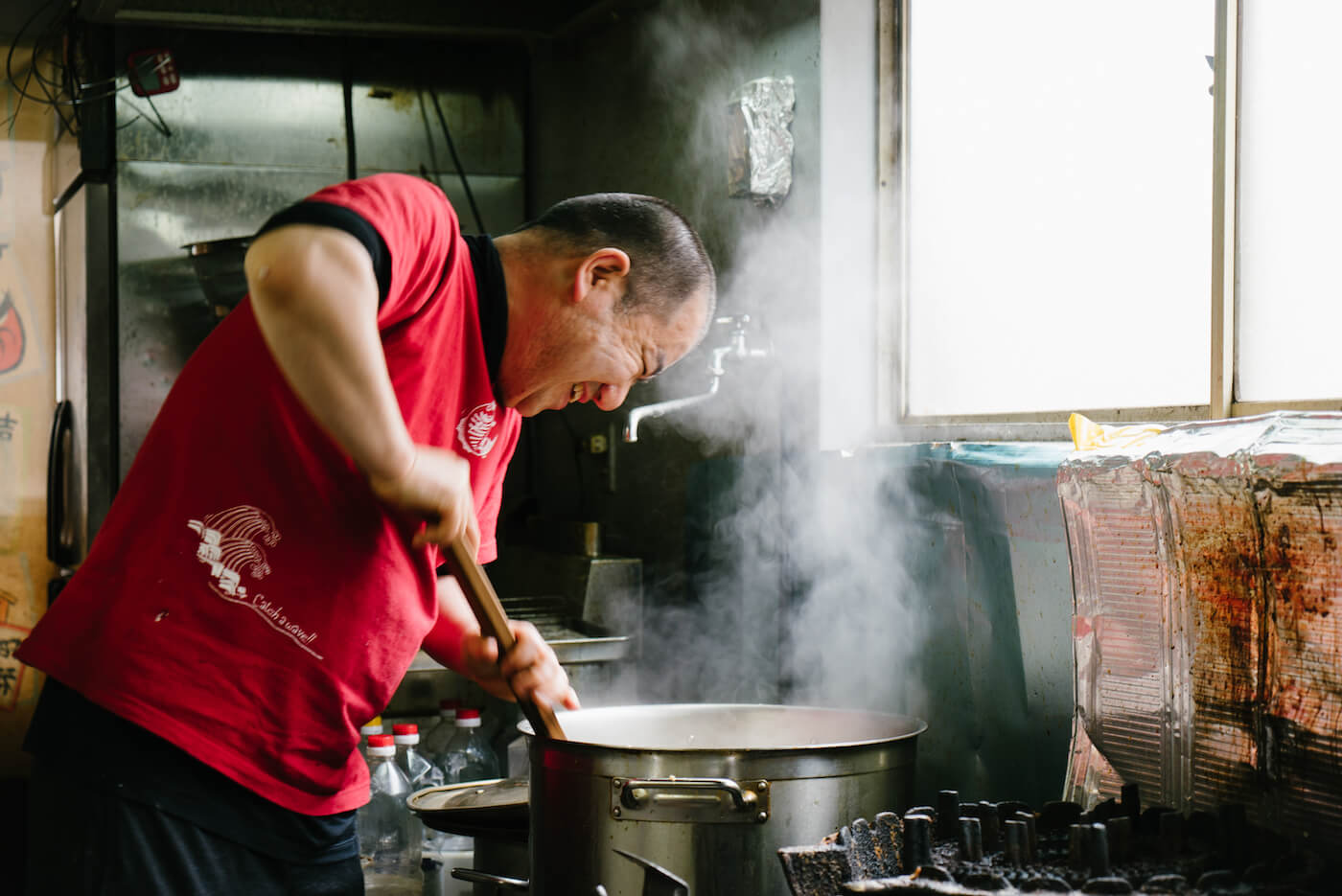 Wait? Are you going to close the ramen shop?

No, I’m not going to quit. Next, I plan to invite people from all over the world to Ichiriki Sushi to learn about Japanese culture and Itoshima. So, I will be closing for a bit and starting construction over the summer to add a guest house to the sushi restaurant.
As a sushi chef, I have tried to think of services that would please people, and that’s how Omoideya and sea bream ramen came to be. From now on, I intend to combine these three into a one-of-a-kind experiential guesthouse. I aim to be an Itoshima landmark! 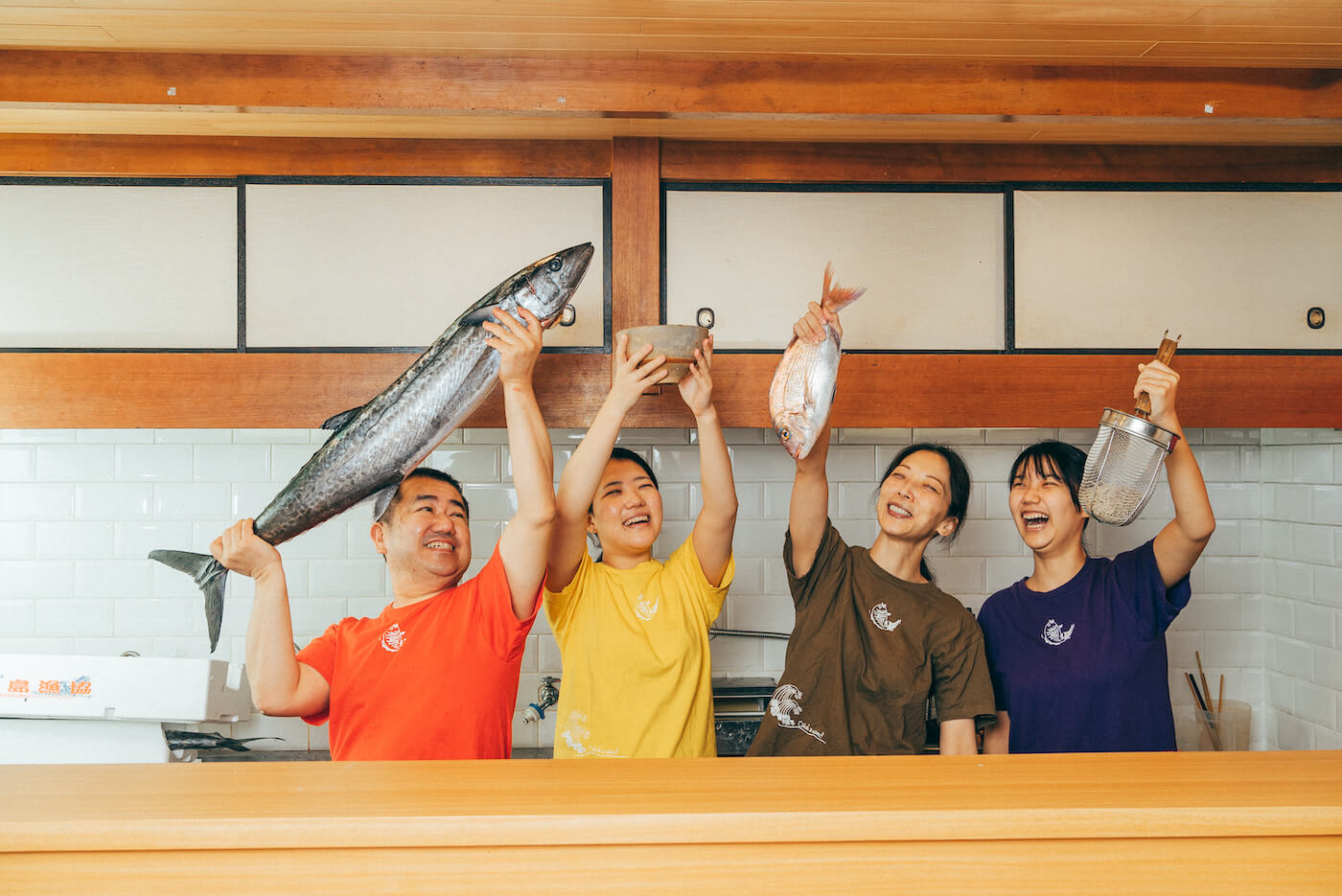