Yuichi Komoda is the owner of the woodworking studio moqu c0mo.
Using cedar and cypress logs with the bark still attached, he creates his Forest Pots, flowerpots hollowed out with a chainsaw, to bring a taste of the mountains to people living in the city.

Yuichi Komoda, 52, is a lumberjack and woodworker who was born into a family of lumberjacks in Itoshima.
Nicknamed Como-san, he continues to create works of art using local wood with the aim of making more people aware of Itoshima’s mountains. He also takes his chainsaw into the forests to help preserve them for future generations. 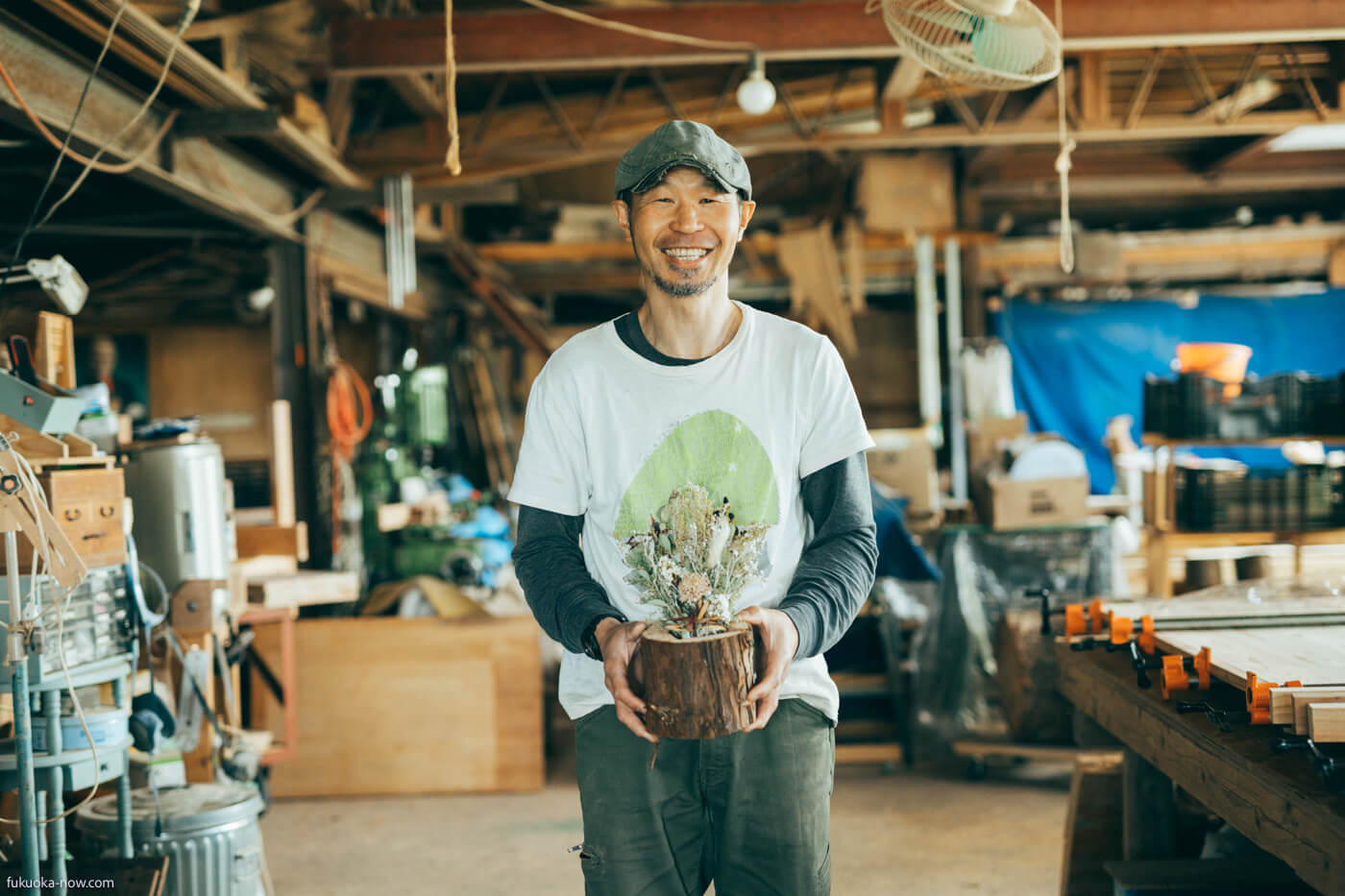 Your Forest Pot is very popular. Can you tell us what you are working on right now?

The Forest Pot is a flowerpot that I developed based on an idea from Coconoki, a shop that handles products made by local artists. I use a chainsaw to hollow out thin cedar and cypress logs that have been cut down and left in the mountains. I do the work right on the spot, because by doing this, you can return a lot of wood shavings to the soil. I am a woodworker, but I also thin the forest to help preserve the mountain environment. Thinning is the process of selectively removing cedar and cypress trees to keep the mountain in a healthy state. If you don’t thin the forest, you will end up with a mountain covered in dense stands of spindly trees. This degrades the environment and makes the mountains more prone to landslides. I consider myself to be a woodworker who maintains the closest possible relationship with the mountains. 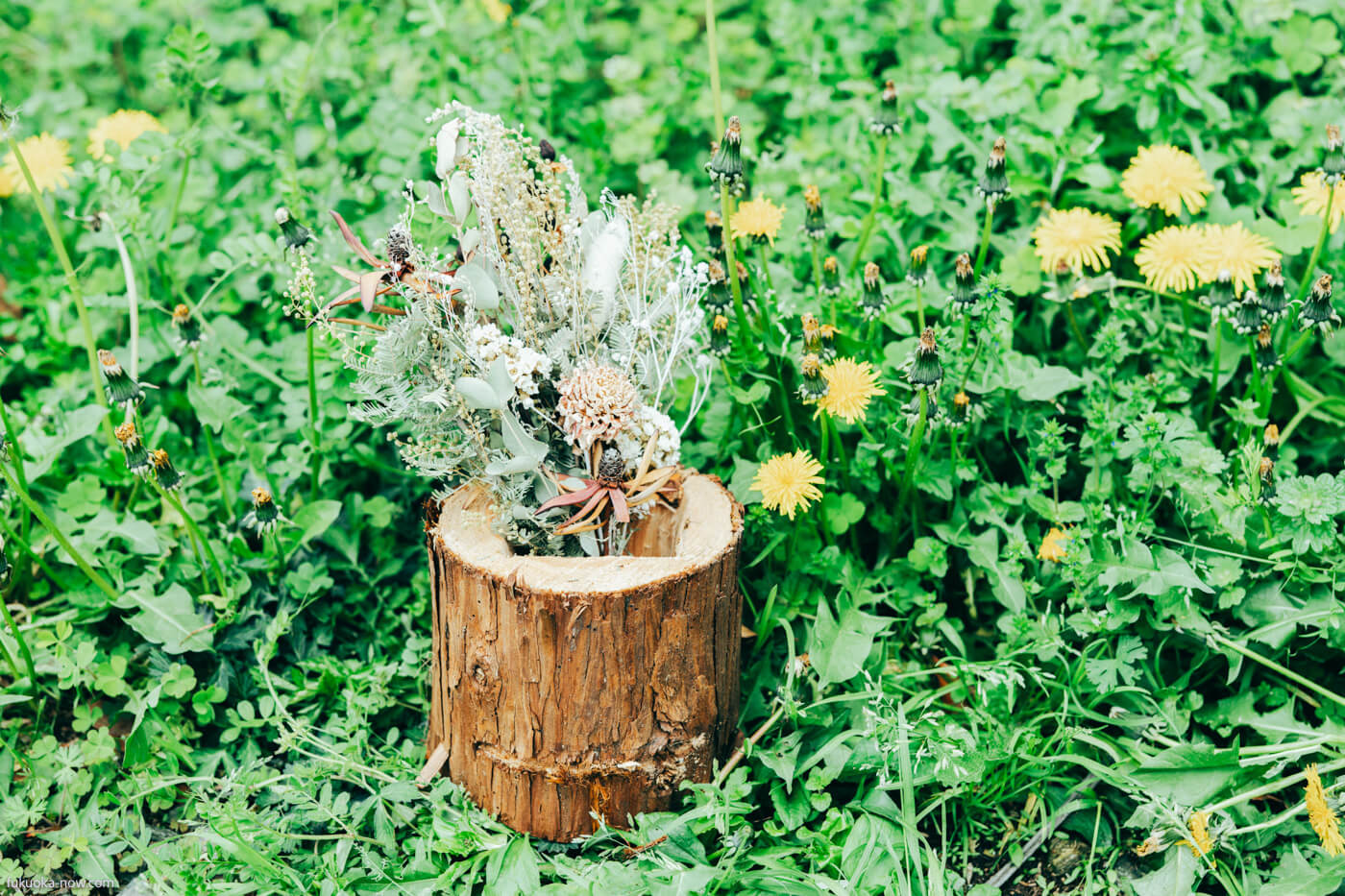 I heard that your father was also a lumberjack. Did you always want to follow in his footsteps?

I absolutely hated the idea! (laughs) My family was really poor. It would be highly frowned upon nowadays, but from around the age of four years old, I had to help out with manual labor in the mountains. My father would cut down a tree, cut it into logs about four meters long, and my brother and I would tie these onto a sled with a rope. Then we would have a horse pull the sled down the steep slopes until it reached the logging road. It was hard work. Not only that, we boys were also responsible for chopping the firewood that the family used as fuel for our bath and cooking stove.

When I was working, one of the things I looked forward to was finding the larvae of beetles that would come out of the wood. They were a great snack— very delicious! After searing them just a little bit, the exterior tastes like shrimp, but the inside tastes like a thick and creamy corn soup. (laughs) While my classmates were at home playing games, I was out chopping wood. I felt inferior, as if I was forced to live in a different era, so I rebelled and dyed my hair blonde in junior high school. Taking over the family business seemed like such an outrageous notion. I wanted to get away from that life. 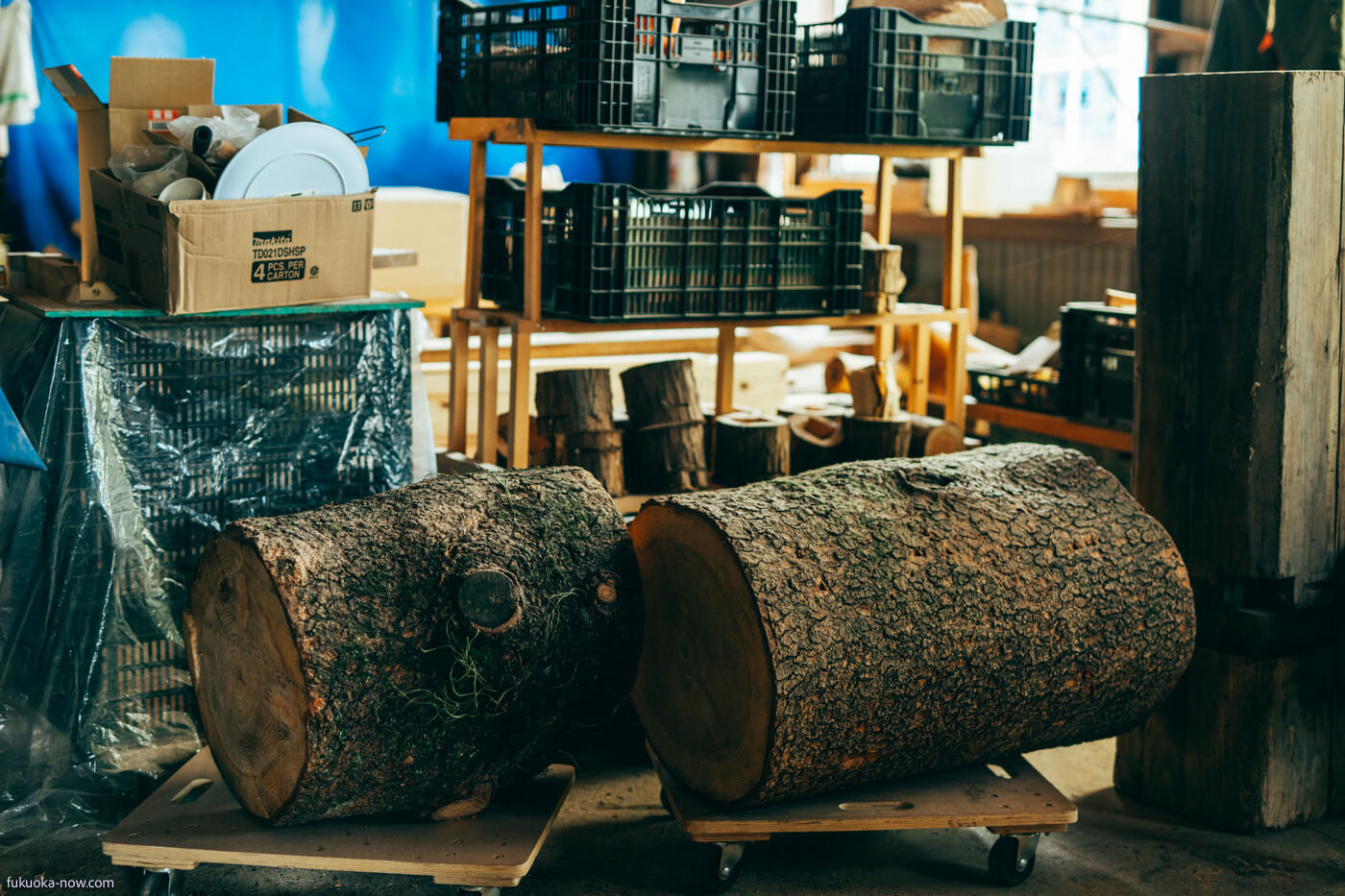 What led you to become a woodworker?

Some people think that because I was born into a family of lumberjacks, I decided to become an artist so that I could make creations from the trees in the mountains, but this is not true. I wanted to get away from mountain life, so after high school, I worked a series of different jobs. Also, I really wanted to live in a city, so I went to work in Tokyo. But I didn’t last long at any of those jobs. I was very temperamental at the time. I would immediately clash with my bosses and quit. There was one company that I did not quit, however. It was a factory that grew enoki mushrooms in Itoshima. Enoki is a white, slender mushroom, but it does not naturally grow into that shape. Enoki cultivation is also physically demanding work. I worked as hard as anyone for 12 years, probably because my parents ingrained in me the lesson of ‘you can’t eat if you don’t work.’ I wanted to improve the quality of our enoki and increase our profit margins, so I devoted myself entirely to researching cultivation methods for nearly two and a half years, even though no one told me to do this.

The president of the company, with whom I often clashed over the issue of mushroom growing, finally gave his approval, and together we were brimming with the hope that we could bring the best enoki mushrooms to market. At this point, I had been working there for 12 years. Then, one morning, when I arrived at work, I found the president of the company lying on the factory floor. His body was cold. He had died from an accident while working at night, and I was the first one to discover him. I stood there stunned. The president was gone and the company was in debt, so we had no choice but to close the factory. The other growers all raved that our enoki mushrooms were delicious, but no one asked me to come grow enoki with them. It was as if those 12 years of grueling work meant nothing. I had hit rock bottom.

But I had a wife and a child, so I started looking for another job so I could make a living. One day, a Hello Work employee suggested that I try woodworking, so I visited a woodworking shop in Itoshima. When I recounted my misfortune to the owner of the shop, he said something entirely unexpected: “Lucky for you. Now that you’re free, here’s your chance to live life the way you really want to live it!” It was a total eye opener. He told me I could lead the rest of my life doing what I want to do. This is when I started feeling positive about the future again. I visited several woodworkers and begged them to take me on as an apprentice. In the end, they all rejected me, but one artist said, “You can’t be my apprentice, but you can be my friend.” He taught me his techniques which led to what I am doing now. 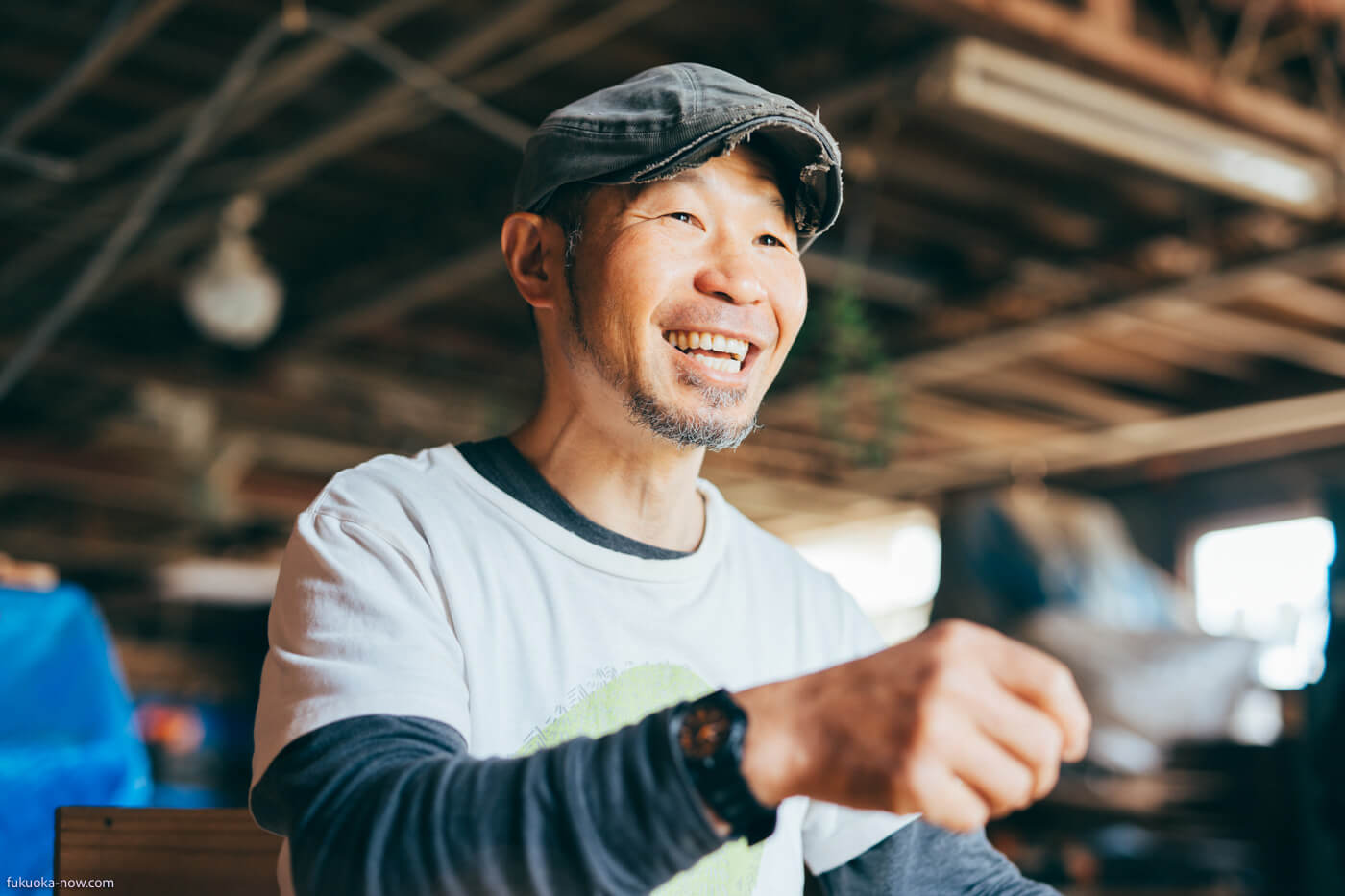 Did your career as an artist start out well?

But the work was nothing like the work I had done in my childhood. We were not cutting trees to earn money; rather, we were working to preserve the mountains and pass on the resources of our hometown to the next generation. I ended up joining the Itoshima City Forestry Research Club, which had been contracted to do the thinning work, and I began to learn more about the mountains.

The cedar and cypress trees that cover the mountains are artificial forests that were planted decades ago to produce lumber. If people don’t take care of them, the whole mountain will deteriorate. However, since the price of domestic lumber has fallen, fewer and fewer people are doing mountain work, so the mountains of Itoshima have become degraded. 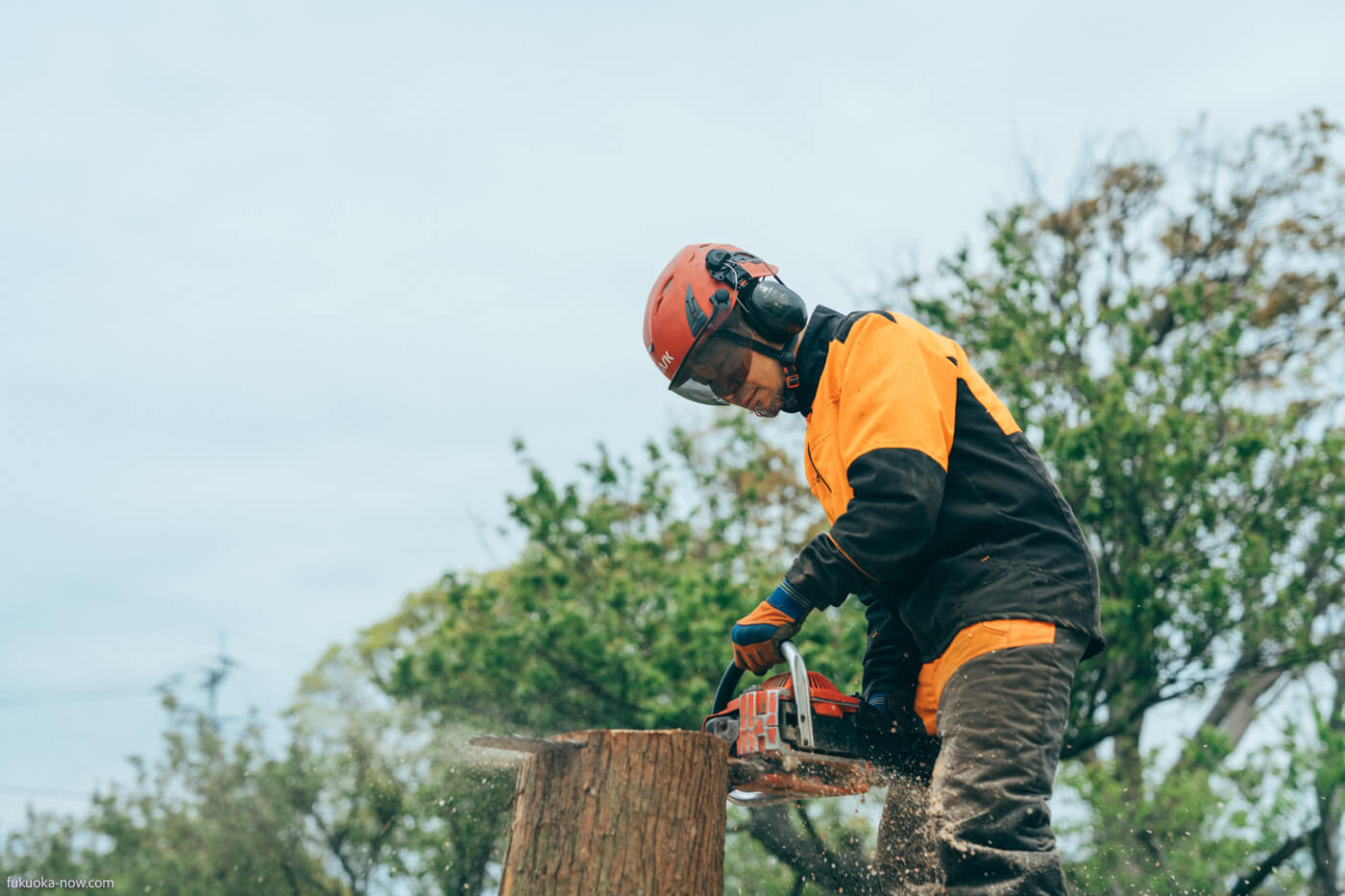 Until then, I had never thought about the mountains or the natural environment. All I could think about was how to make money. After joining the Itoshima City Forestry Research Club, however, I came to realize that the nature and landscape of my hometown, which I had always taken for granted, are actually maintained by people. My values have changed so much that I can safely say that I have turned a new page in life. Now I have much respect for the local people who have worked to preserve our agricultural and mountain landscapes. Looking back, I realized that even my father, who I used to loathe, took pride in logging. He used to tell me not to ruin the mountain by cutting down trees the wrong way. Based on this experience, I started using the thinned lumber from mountain maintenance work as the raw materials for my woodworking. I hope to create a virtuous cycle by utilizing thinned wood. 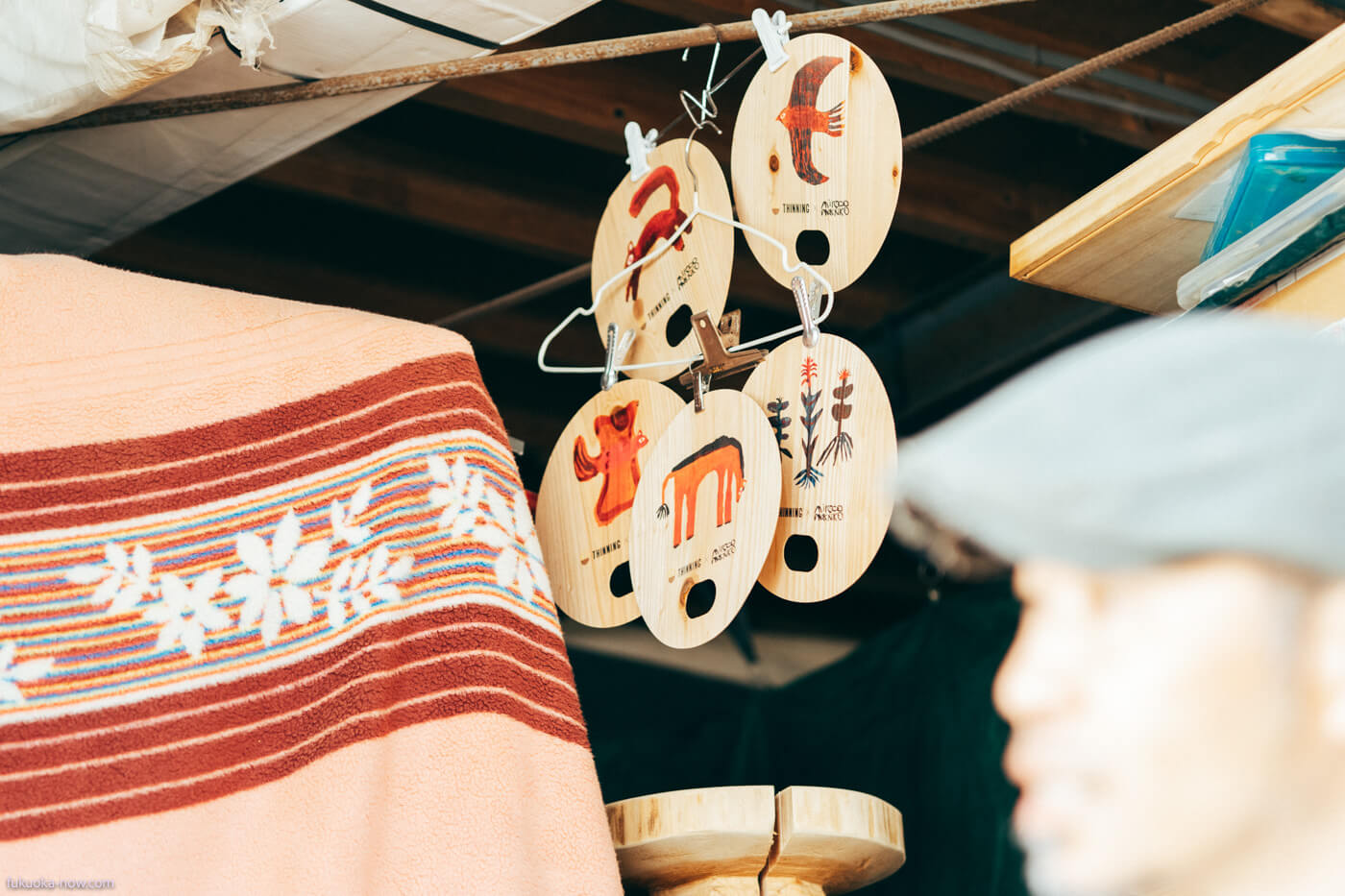 What are your dreams for the future?

Ever since I started wanting to protect the nature of my hometown, I have made many new friends. We started an event called Thinning, which is especially meaningful. It is an irregular event where we sell products with the aim of communicating the issue of mountain devastation to a wide range of people. Outdoor brands, stores and artists from Itoshima and beyond set up stalls. This project was started by my friends around the time I became aware of the problems our mountains are facing. Looking back, the timing was miraculous. As the only member of the organizing committee who actually does forest thinning, I am conscious of my position as a link between the community and the mountains.

Right now, Itoshima is booming with tourism and people moving in from other regions. That is why I want people to value not only the superficial beauty of the landscape, but also the activities of the local people who have been working to preserve that beauty. I plan to stay in Itoshima and keep working to preserve the city’s wonderful landscapes.

Recently, I learned the phrase “pay it forward.” When someone treats you with kindness and love, it is your turn to do the same to those around you. I think it is a wonderful concept. You can only do little things on your own, but if you pay the kindness you receive forward, you are sure to achieve great things. If we pay forward the gratitude we have for the community and our friends by taking good care of the soil, light, water and wind of Itoshima, I am certain we can make the city, and the world, a better place to live. 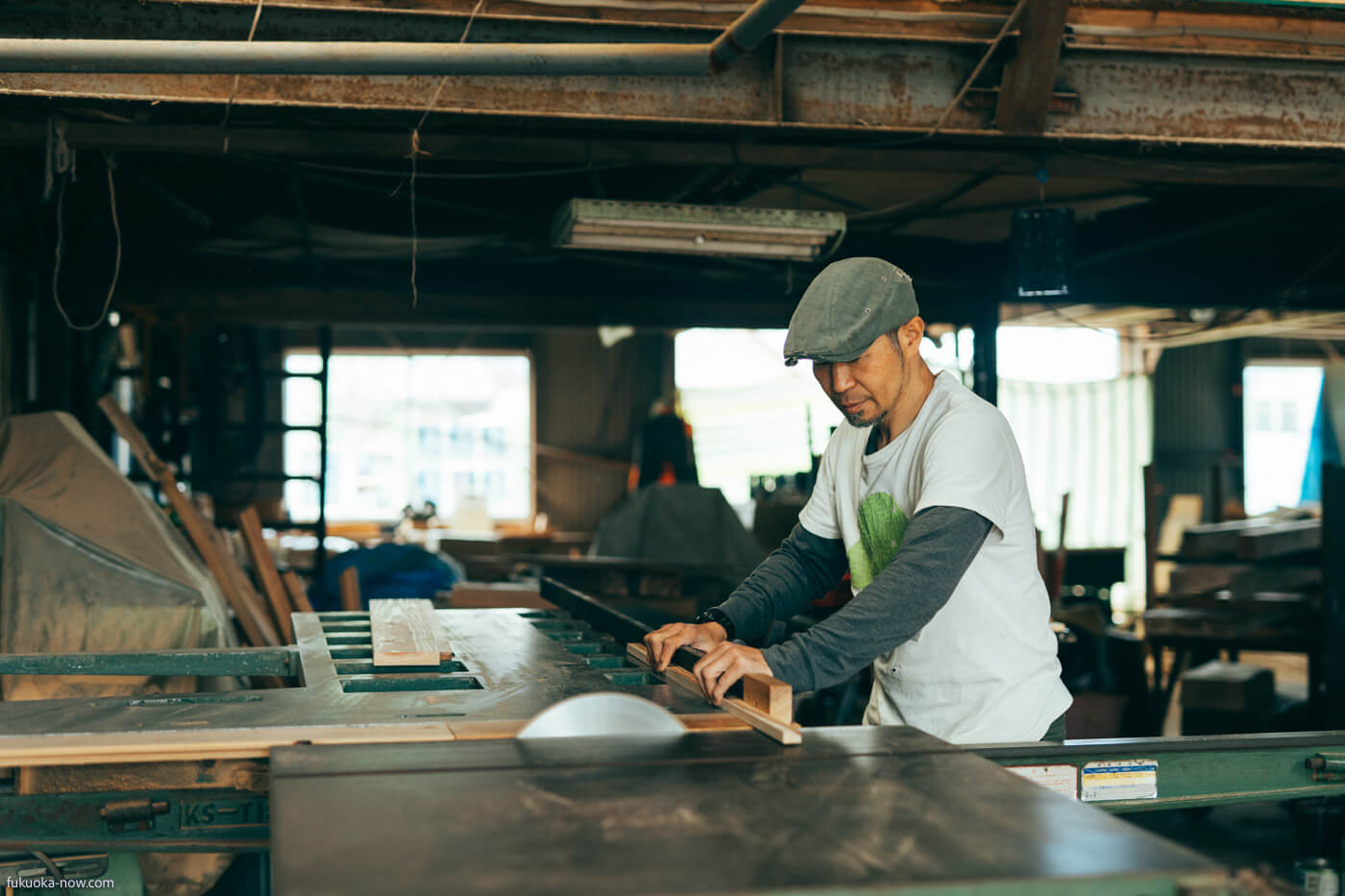 There was pleasant music playing in the rugged workshop filled with large machines, and Como-san had put a pot of coffee on the table for us. I was already following him on social media, where he often posts pictures of wild flowers and talks empathetically about the joys and sorrows of his friends, so I was drawn to his personality even before I met him. By interviewing him, I was able to understand the history behind the smiling face I had seen in his pictures. He was able to overcome difficulties thanks to the insights and opportunities afforded to him by the people he has met in life. It seems to me that the wellspring of his soothing works is the deep sense of gratitude and humility that he possesses. 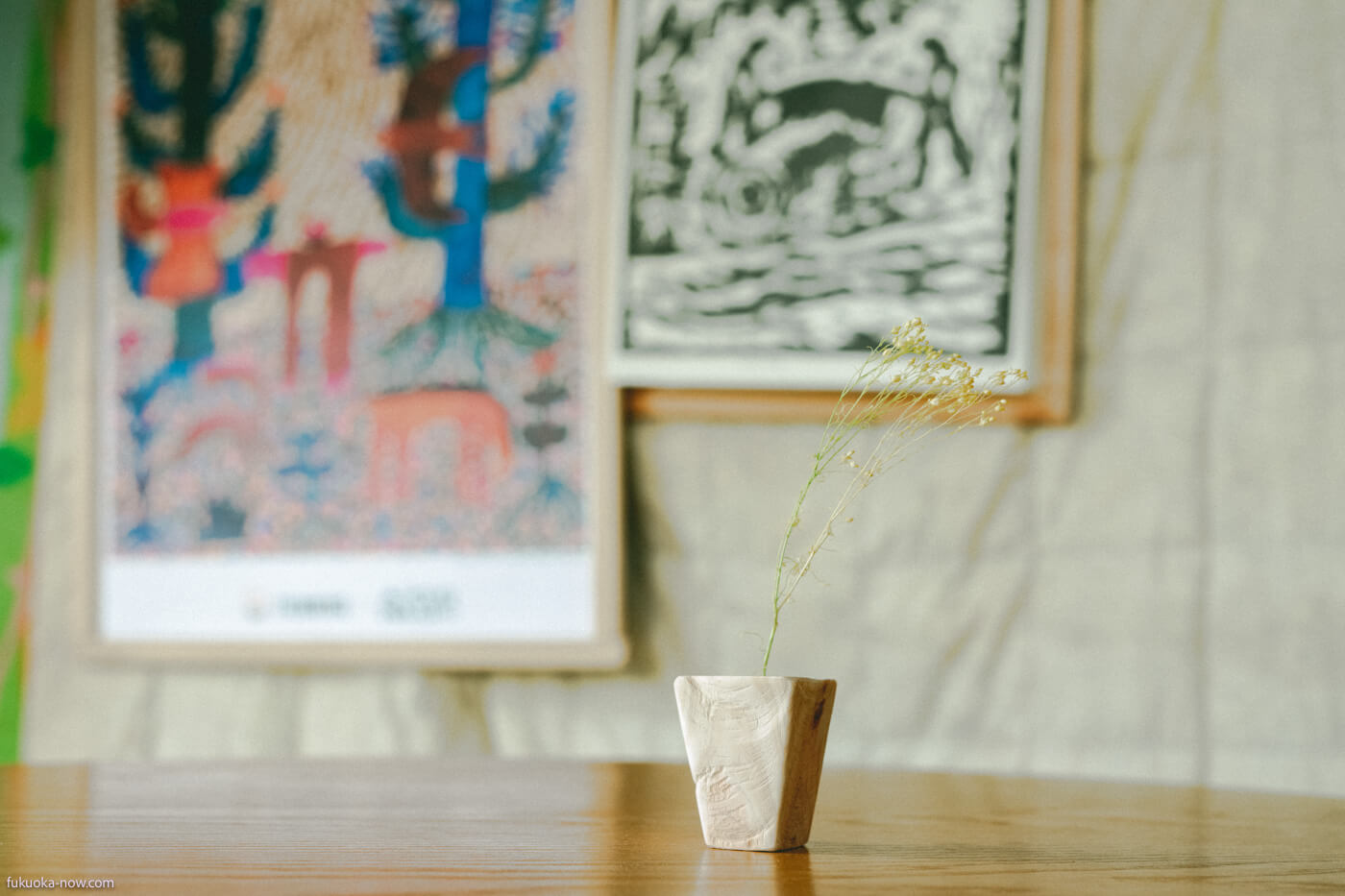