Funakoshi Fishing Port in Itoshima boasts the largest catch of wild sea bream in all of Japan. Funakoshi is also home to Kitai Shoyu, a soy sauce brewery that has been operating since 1897. Having been in business for more than 120 years, Kitai Shoyu is committed to producing authentic soy sauce without using any chemical seasonings. Hiroshi Yamagami, the sixth generation owner of this local treasure, is also actively involved in initiatives that focus on the global environment, such as reusing soybean lees—the leftover residue after beans have been pressed into soy sauce—as fertilizer for soybean fields. 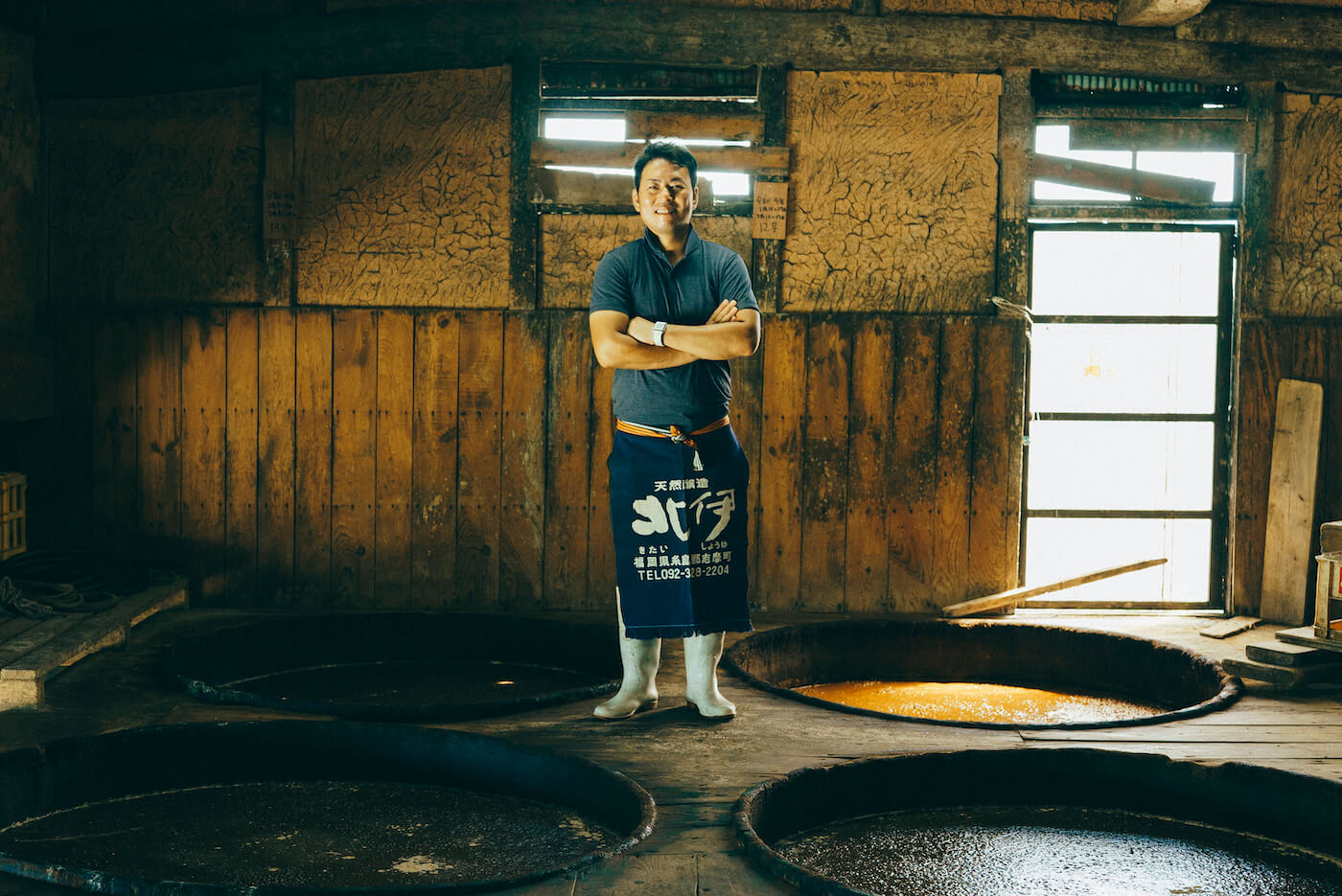 Did you always want to take over the family business?

When I was in elementary school, I hated being called the son of a soy sauce shop owner, but every New Year’s Day I had to tell my grandmother that I was going to take over the company so I could get my New Year’s money from her (laughs). So, even as a young child, I figured I would have to make soy sauce someday. 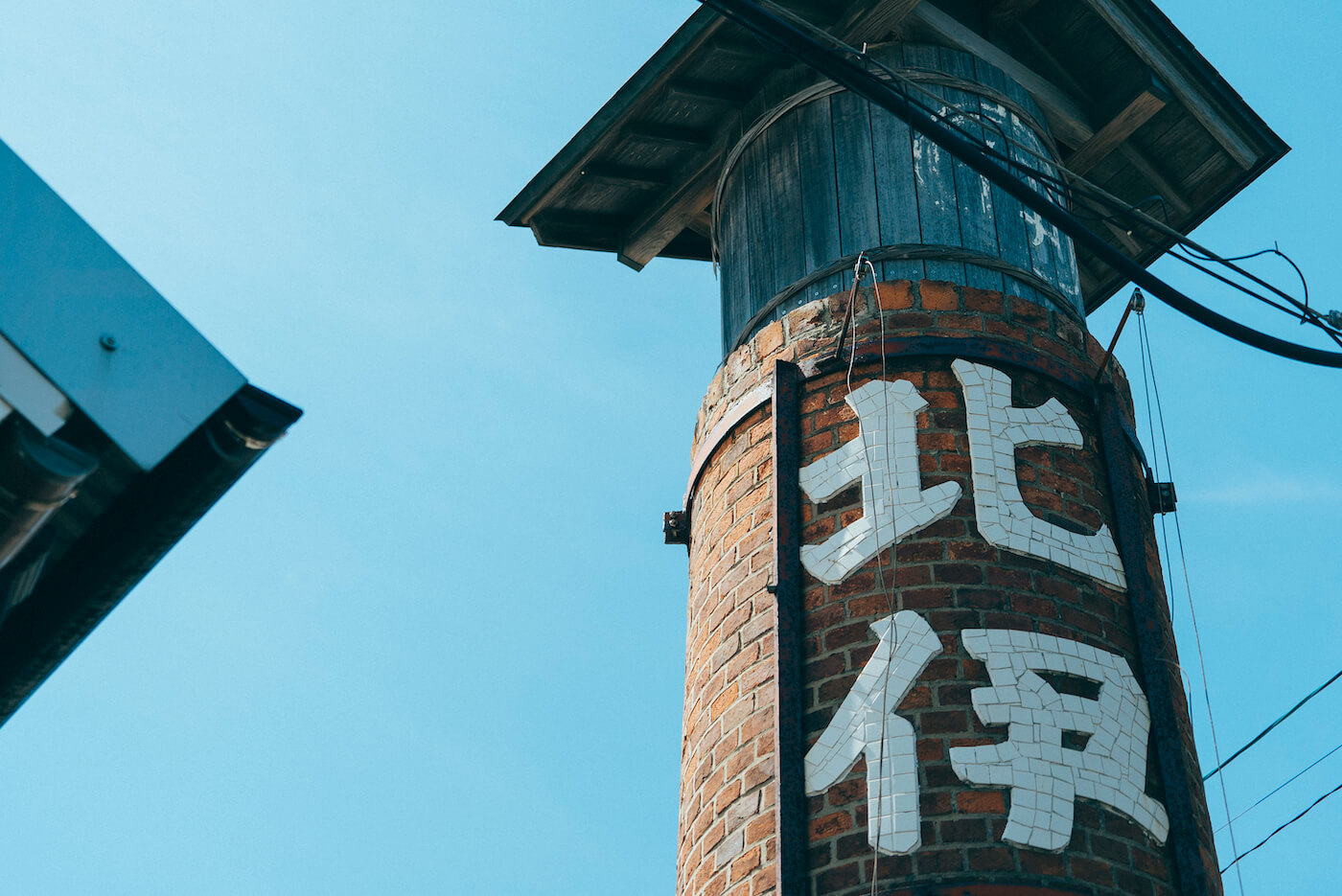 When did you start making soy sauce?

When I was 27. After graduating from university, I went to a culinary school and worked as a chef at a kaiseki (traditional Japanese full-course dinner) restaurant in Osaka. While most people in my position would have probably trained at another soy sauce maker, at the time I thought about who I would have to explain our soy sauce to after I took over the business. I decided to become a chef because I knew I would have to sell our products to chefs and other people in the restaurant business. Thanks to this, we were able to develop a varied lineup of processed soy sauce products, such as a soy sauce for raw egg on rice and a sauce for ramen, for both restaurants and individual customers. We also provide original soy sauce and ponzu to the oyster huts in Itoshima that are tailored to each shop. 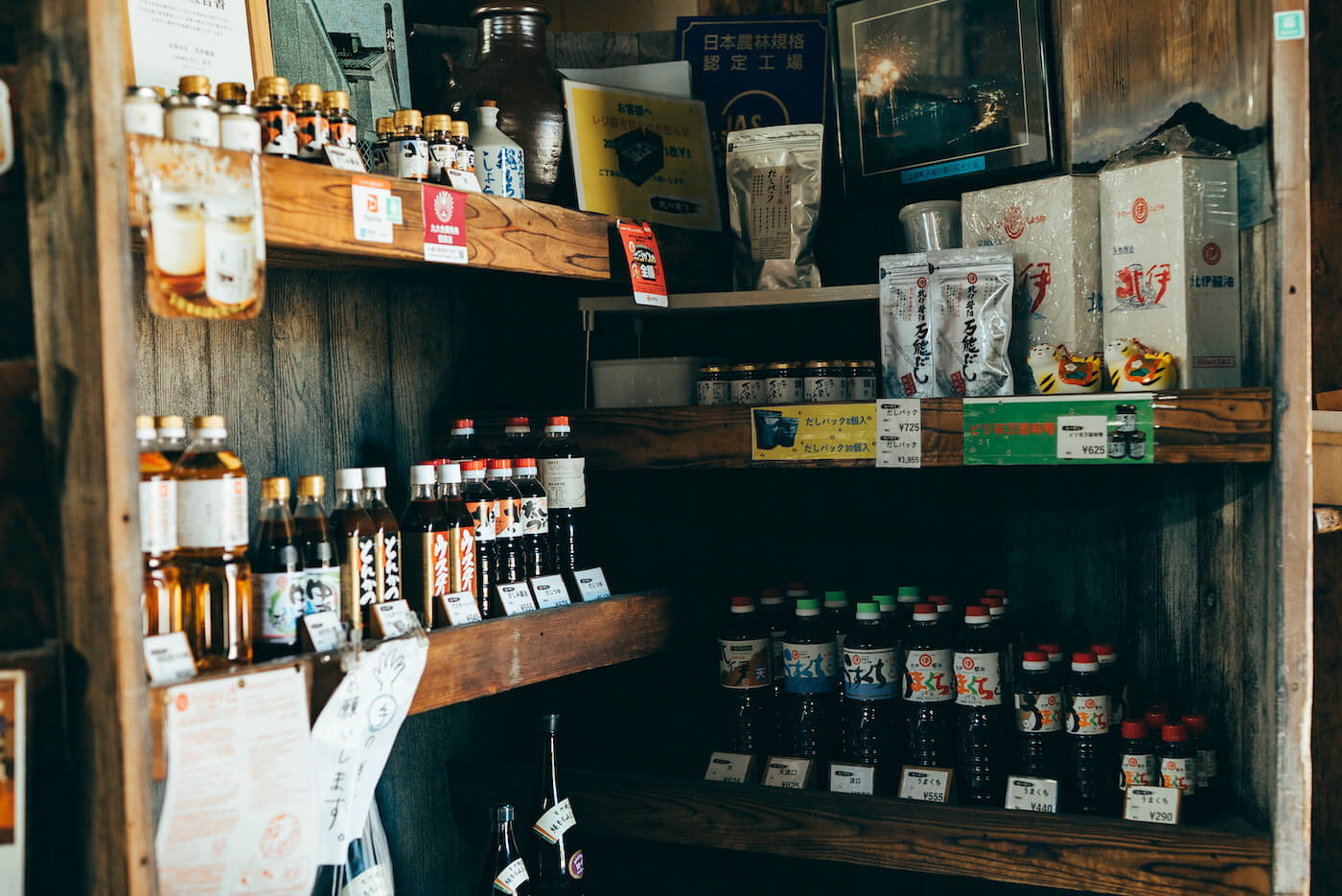 Is it difficult to make soy sauce?

Yes, it is really hard. To make soy sauce, you mix soybeans, salt and wheat with koji mold, and then you ferment and mature the mixture to make soy sauce mash. The soy sauce is made by squeezing the liquid out of the mash. Large manufacturers mass-produce soy sauce in automated factories in just six months or so, but we make soy sauce by hand the old-fashioned way, in small batches. We mature and ferment the mash in cedar barrels for two and a half to four and a half years. The production of honjozo (authentically brewed) soy sauce, which is made using traditional methods without any added seasonings, is now on the verge of extinction. 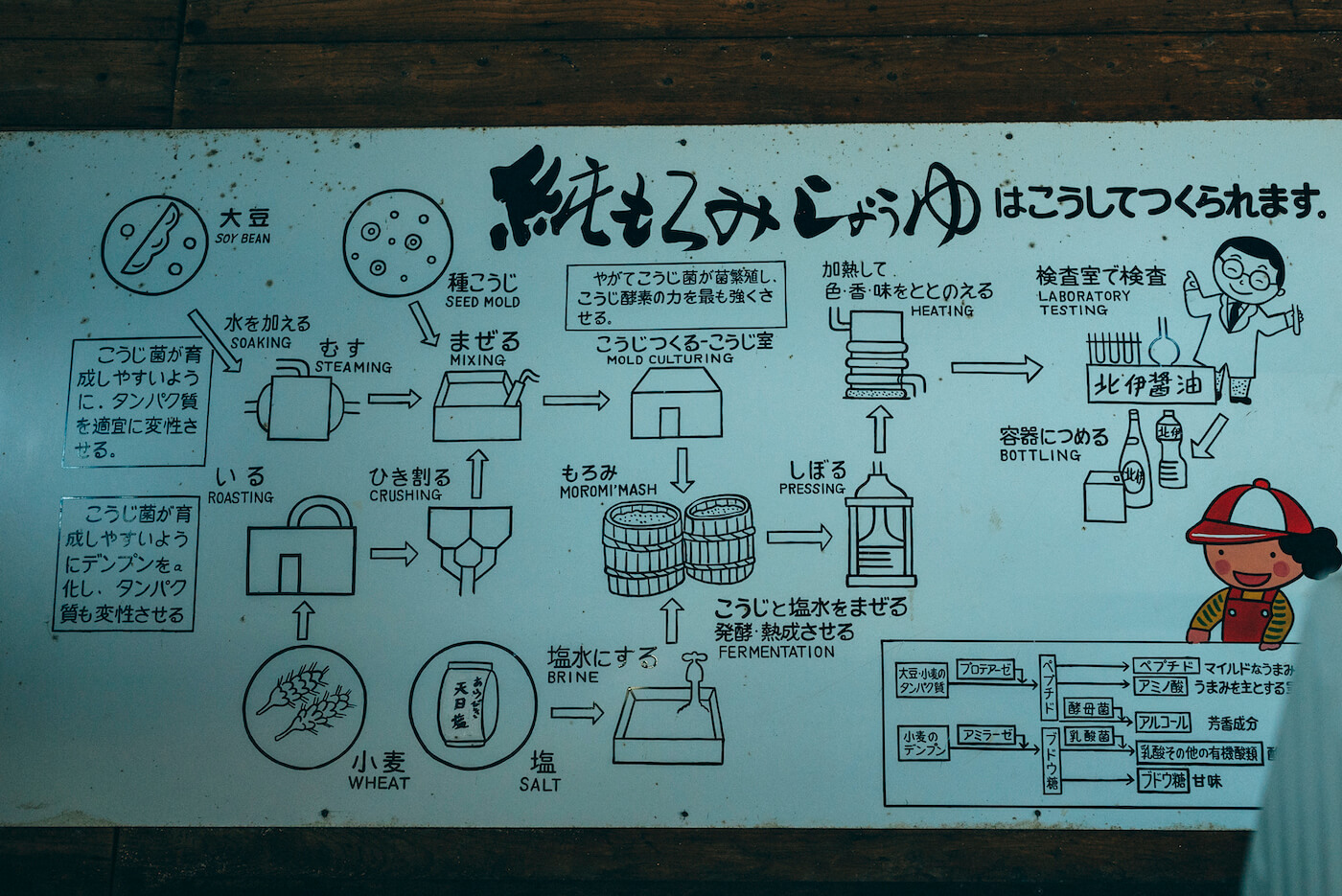 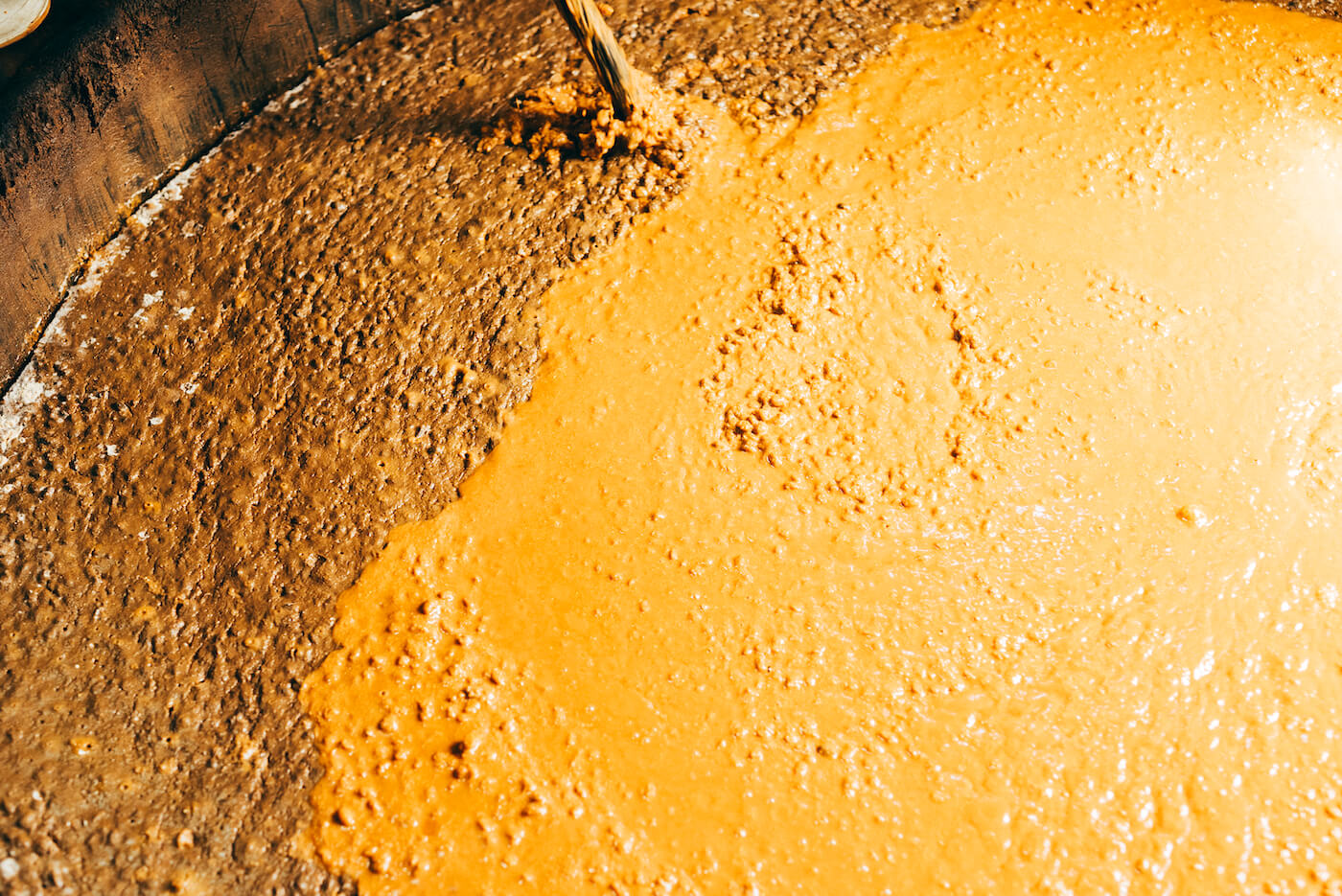 Didn’t you want to automate the process so you could easily mass produce your product?

When I first came back to the family business at the age of 27, I was hell-bent on increasing productivity and making money by installing the latest technology. I wanted to be admired as an accomplished young businessman (laughs). Then one day, when I was having drinks with an older colleague from Itoshima, he told me, “I don’t think the charm of your place is producing soy sauce like any other industrial product. It’s that you continue to use the production methods handed down over the generations.” My pride was wounded as a young, go-getter, but from there, I set my sights on preserving our traditional methods. Of course, we automate part of the process where we can to reduce the burden on the workers, but we keep some of those steps that seem inefficient because there is meaning in doing it by hand. 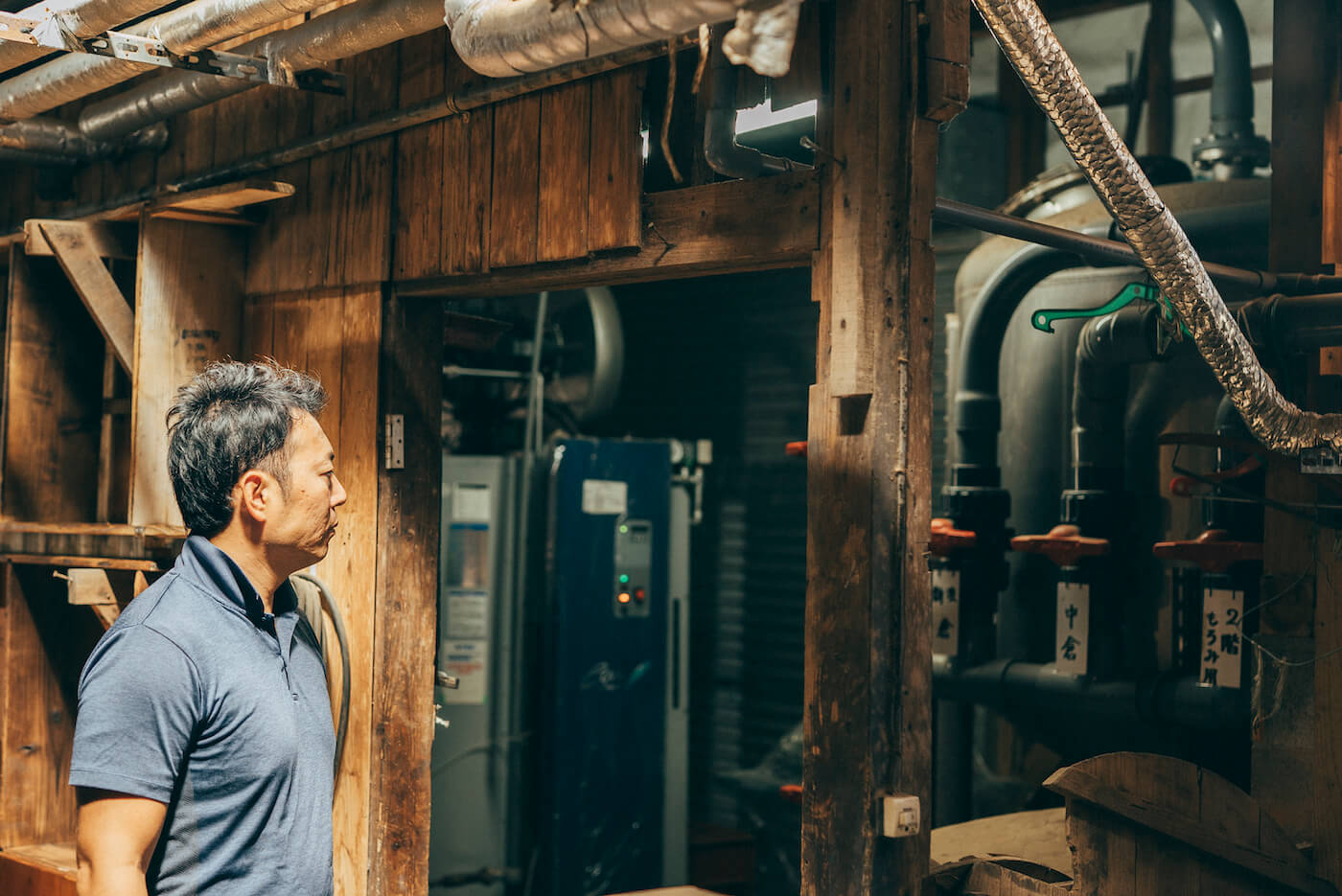 What parts of the process are inefficient?

One example, although it is not directly related to soy sauce production, is the collection of empty soy sauce bottles. We wash and reuse them, and this take time and incurs labor costs. Kitai Soy Sauce is the only soy sauce brewery in Itoshima that reuses bottles. Some of the other brewers I know are surprised that we still do this because it is an added burden. But now the SDGs are a major topic worldwide. If we can reduce waste and make even a small contribution to the global environment, we will continue doing this, even if it is a little bothersome.

You are also interested in environmental issues. Tell us about that.

As a parent of three children myself, I want to convey the importance of local resources and the environment to the children of Itoshima. We use the lees from soy sauce production to the maximum extent possible, instead of just discarding them as industrial waste. We used to discard the lees because, after the liquid has been squeezed out, they have no leftover nutrients; however, after consulting with Hyakushoya, a farm that grows soybeans in Itoshima, we found out that they could be used as fertilizer for the fields. Kitai Soy Sauce now purchases almost all of its soybeans from Hyakushoya, and we return the organic waste from soy sauce production to the soybean fields, thus creating a virtuous cycle. We are proud to say our soy sauce brewery produces less waste than a typical household. 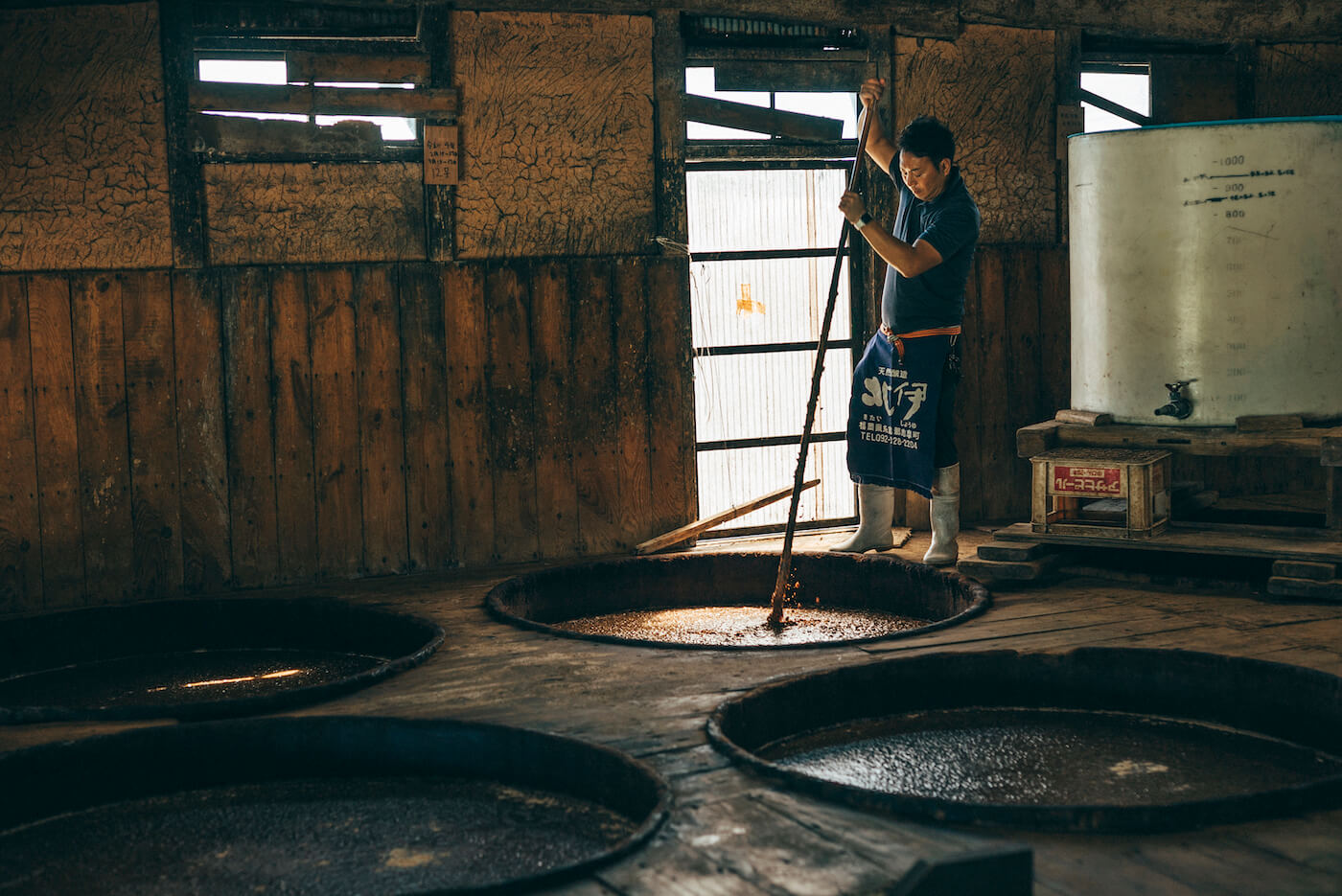 What are your dreams for the future?

Kitai Soy Sauce has been supported by the local community for 120 years, so I want to give something back. Funakoshi attracts many visitors to its oyster huts, which are only open for a short time during winter, but I would like to make it a destination that visitors can enjoy year-round. What I envision is teaming up with the fishermen of Funakoshi to open a restaurant where people can eat the dishes that the local fishermen do and buy processed fish products to take home. After they eat, it would be great if they could visit our soy sauce brewery and try their hand at making soy sauce. Funakoshi is the number one fishing village in Japan for wild sea bream. But even still, people won’t eat the fish unless it is paired with seasonings. Therefore, I think a collaboration between fishermen and seasoning producers working together to promote Funakoshi’s attractions can only be mutually beneficial. With its beautiful ocean and scenic Mt. Kaya, Funakoshi has outstanding potential as a tourist destination. I would like to create a space that will make people realize just how great Itoshima is, starting with my hometown of Funakoshi. 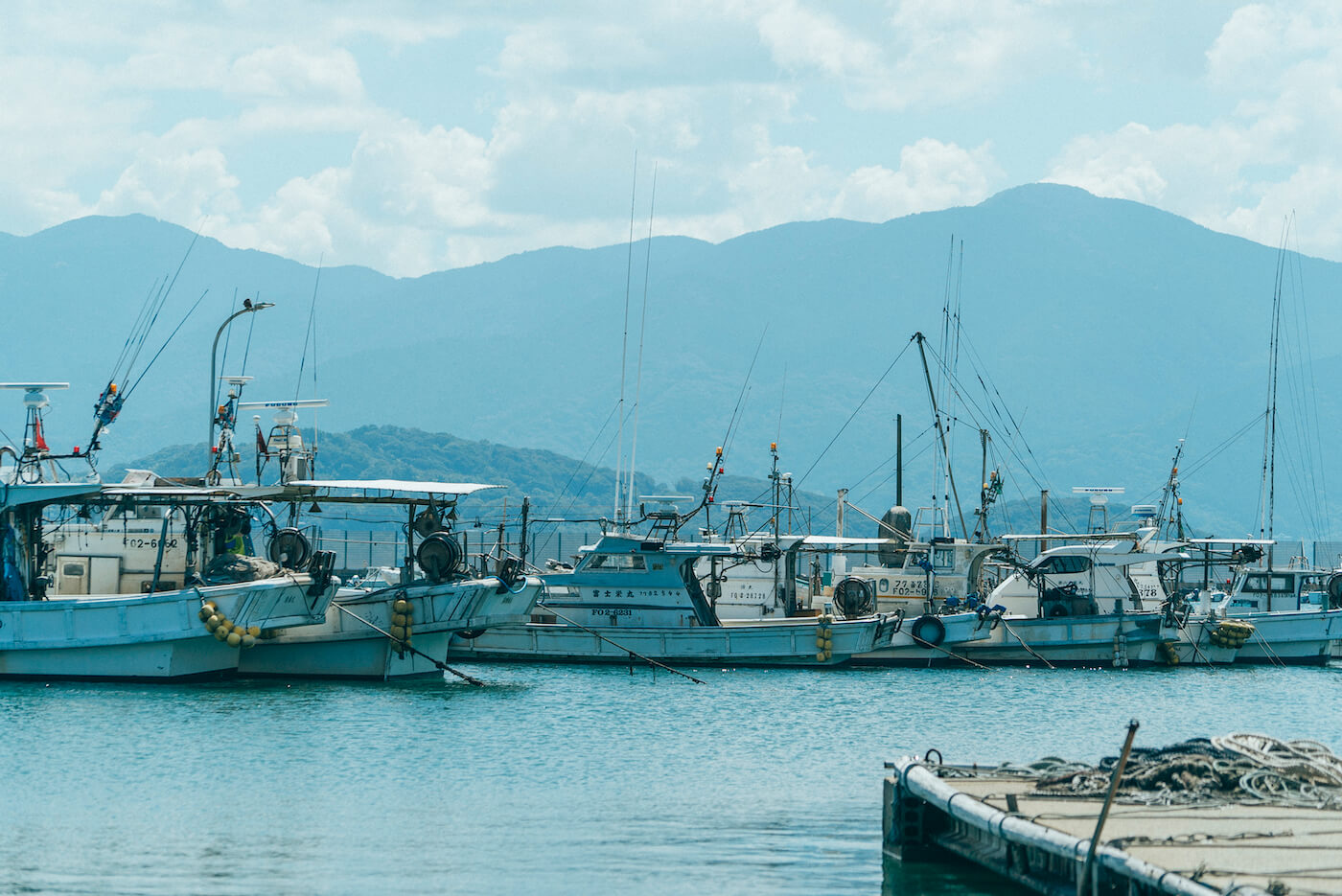 Yamagami is currently the head of the Itoshima Junior Chamber of Commerce, an organization of young Itoshima businessmen, and he is involved in supporting local businesses as well as managing his family-run soy sauce brewery. He has been encouraging oyster huts to adopt IT, and an increasing number of these huts have seen their revenues rise because of this, despite the pandemic. We look forward to seeing how Yamagami, as both a soy sauce artisan and a businessperson, will make his hometown of Funakoshi a more attractive destination. 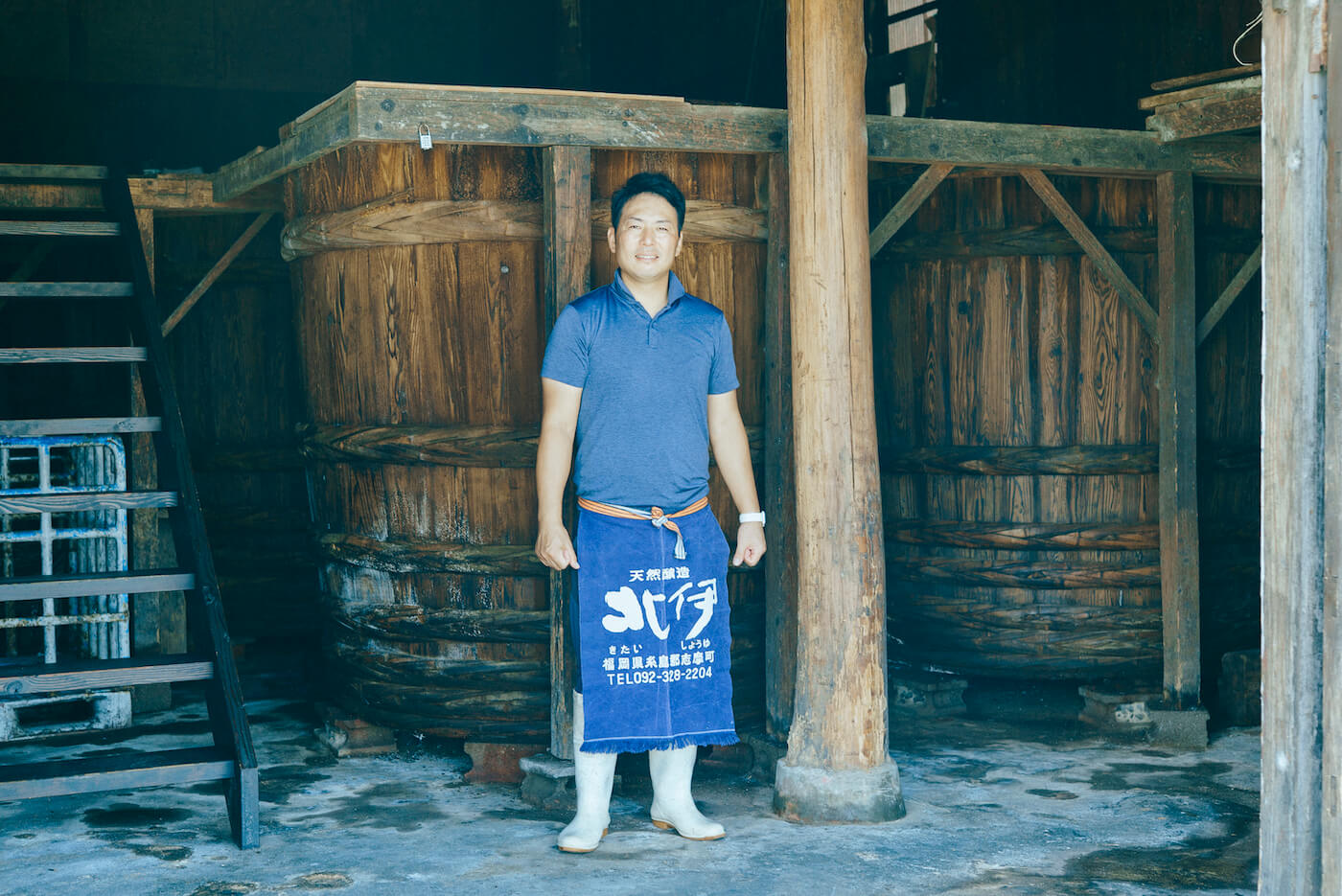