The organic fishing methods of Itoshima

Agriculture and fishing, both of which draw from nature’s bounty, are important industries that are directly connected to our dining tables. Organic farming is not just limited to fruits and vegetables. Fish and seafood are also produced using organic methods and consumed locally, giving due consideration to the ecosystem as part of an effort to ensure people’s health and coexist with nature.

Fish are a limited resource. The first step we can take to protect the health of our oceans and local culture is to choose fish that is caught locally using eco-conscious fishing methods, rather than relying too much on imports or aquaculture. 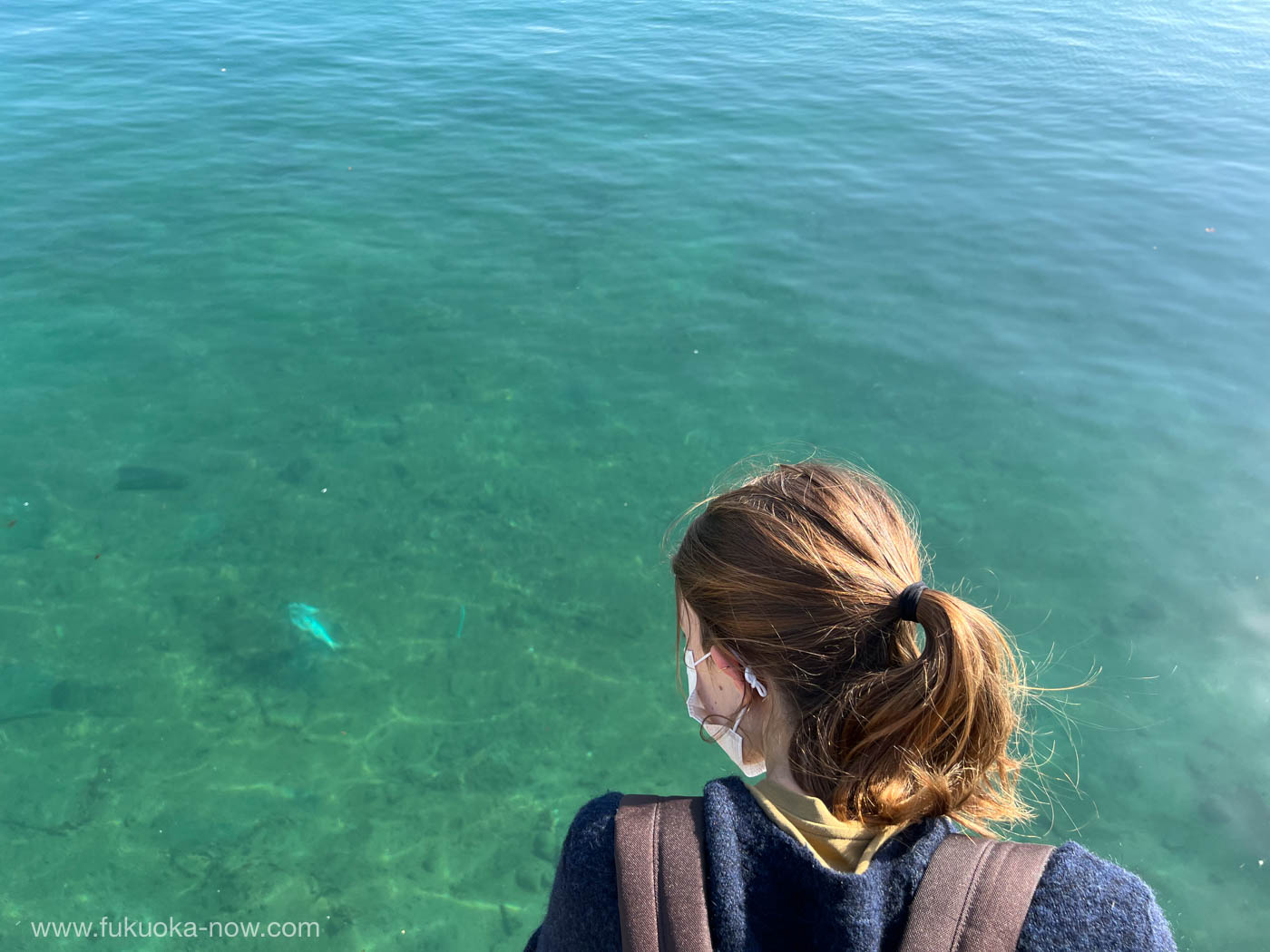 Wild clams from Kafuri in Itoshima, a rare species endemic to Japan
The Kafuri tidal flats have long been known as a good fishing ground for shellfish, and for a time, the number of shellfish had decreased dramatically due to overfishing. This is when the fishermen of JF Itoshima, a fishing cooperative, rose to the occasion. Even after successfully bringing shellfish fishing back from the brink through cleanup activities and efforts to improve water quality, the fishermen continue to protect the environment by adopting a style of fishing focused on resource management, under which the fishing season is specified (from November to the end of March) and the size of the catch is limited. 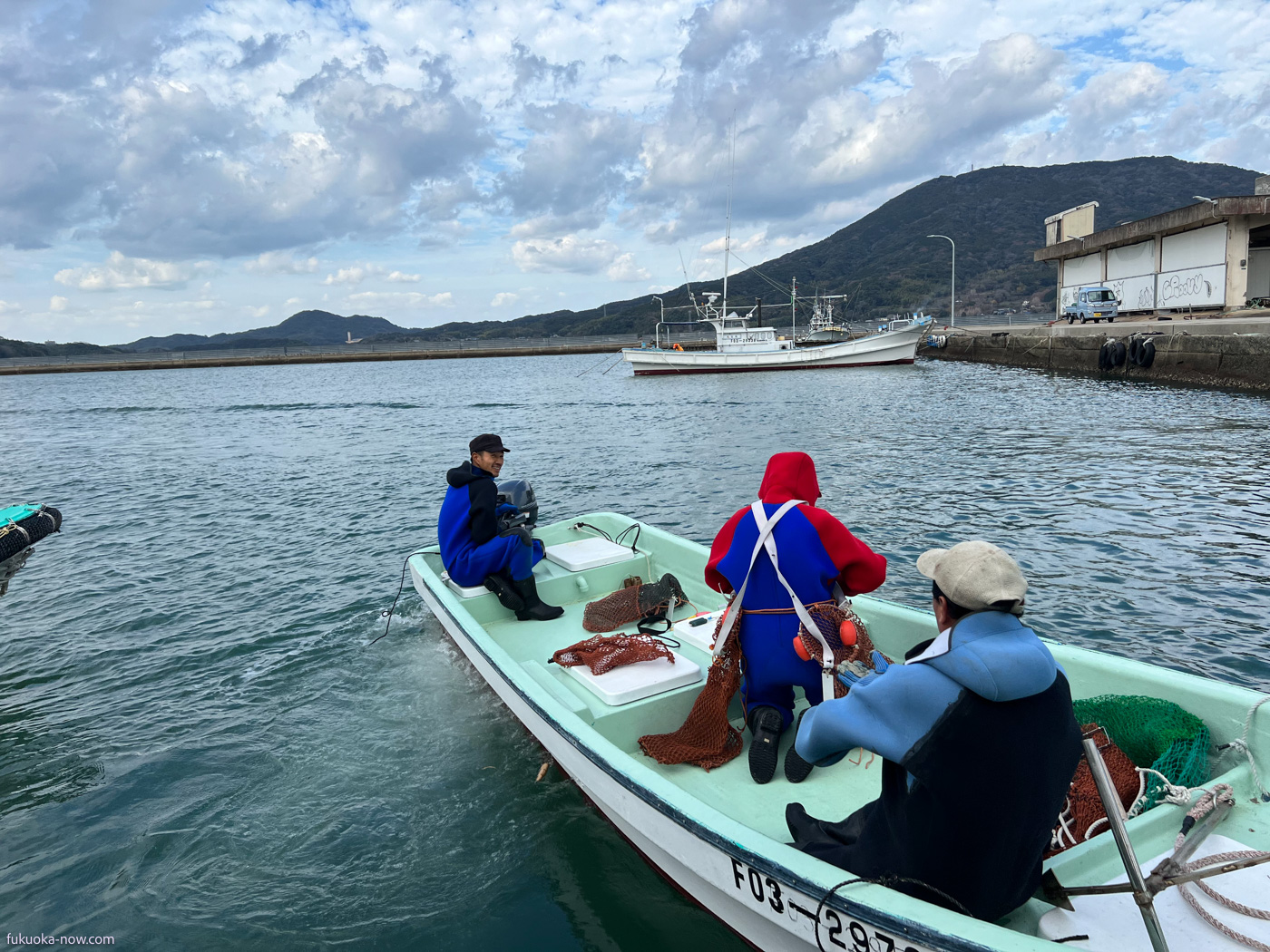 Fishing for organic squid with basket traps heralds spring in Itoshima
Squid in Itoshima is not caught by fishing or casting nets but by catching them in basket traps, a traditional fishing method that takes advantage of the squid’s habit of laying eggs in seaweed on the seabed. After catching the squid in baskets, the eggs are returned to the sea. In Itoshima, squid fishing season starts on Feb. 10 every year. Fishermen attach branches of the Japanese holly bush to the outside of the basket traps and then submerge them underwater in the squid fishing grounds. The spawning squid are caught in the basket traps, and the holly branches that the squid have laid their eggs on are removed from the baskets and returned to the sea at the end of the fishing season, where they are expected to hatch and grow. 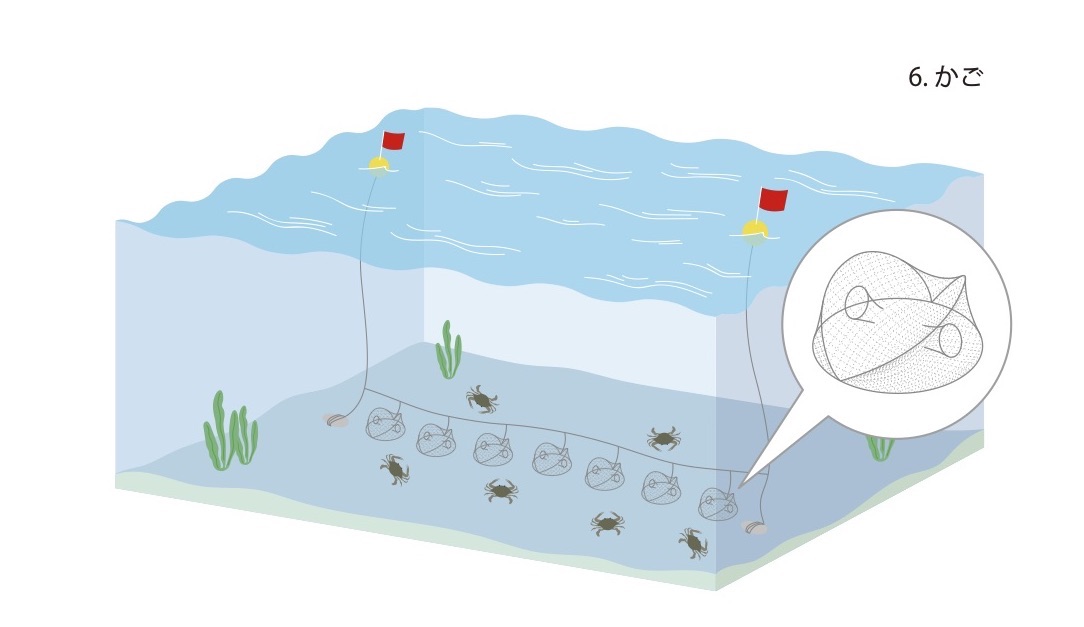 Oyster farming
Oyster huts are a popular winter tradition in Itoshima that began around 1990 when fishermen started farming oysters in the area. Even as marine product catches continue to decline, Itoshima’s oysters are a rarity in that both their production volume and value are on the rise. Moreover, most of the oysters are sold in the oyster huts that are run directly by the fishermen. Itoshima oysters are a prime example of a marine product that employs the farm-to-table concept.

The landscape of Itoshima, with mountains nearby and mineral-rich rivers that flow from the forests into the sea, makes the area perfect for oyster farming. Every year around April or May, the fishermen attach scallop shells with oyster seeds on them to the floating racks in the bay. The oysters feed on plankton for the next six months and are harvested in the fall. This is when the seasonal oyster huts pop up in the fishing ports. 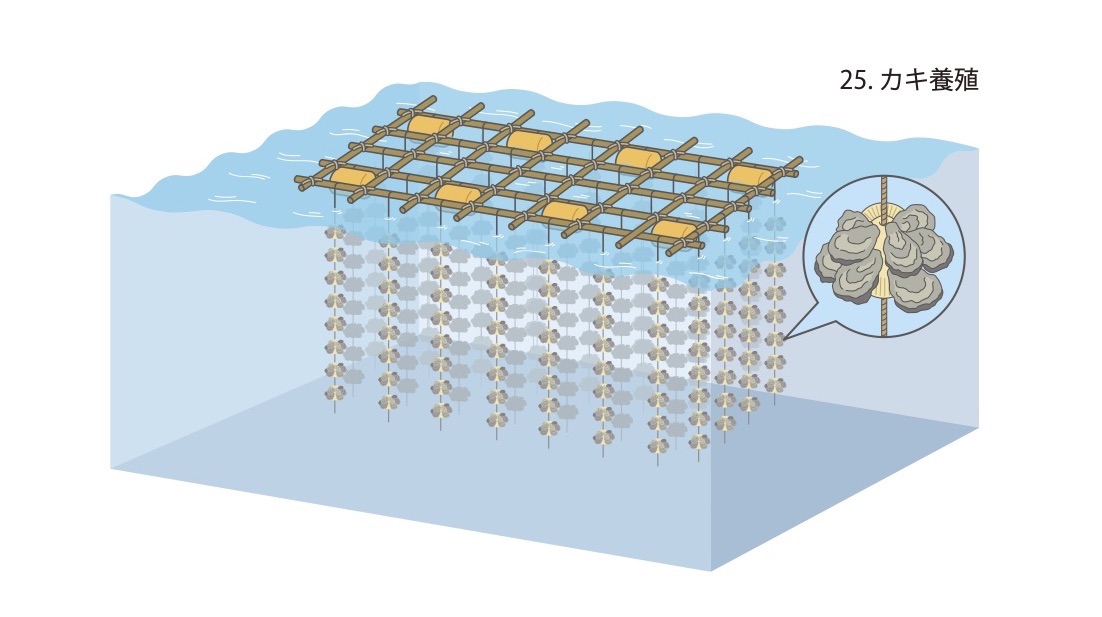 Gochiami fishing
Itoshima’s fishing industry is dominated by seine fishing, in which boats equipped with nets surround schools of fish and then draw them in to catch the fish, and the most fish are caught using a method called gochiami fishing, which uses a bag-shaped net.

Itoshima boasts the largest catch of wild sea bream in Japan, which is caught using nisou gochiami (where two fishing boats run side-by-side with a net stretched between them) and the single-boat issou gochiami. Gochiami fishing is one of the traditional methods used in Itoshima, which has a more-than-1,000-year history as a rich fishing ground. It takes years of experience and luck to learn how to read the tides, find schools of sea bream that cannot be seen from the boat and know when to lower the net. In order to protect the ecosystem, gochiami fishing is prohibited in Itoshima from January 1 until the end of April.

Did you know?
People tend to think that they can freely harvest fish, shellfish, seaweed and other aquatic plants and animals by fishing, digging in tidal flats or other methods, but there are various legal restrictions on fishing. There are detailed regulations on both the general public and commercial fishermen, such as designated areas where permission from the governor is required (i.e., areas where you can see signs that say no leisure fishing), what kind of fishing gear and methods can be used, prohibited areas and seasons, size limits for each species of fish and restrictions on the use of lighting at night. 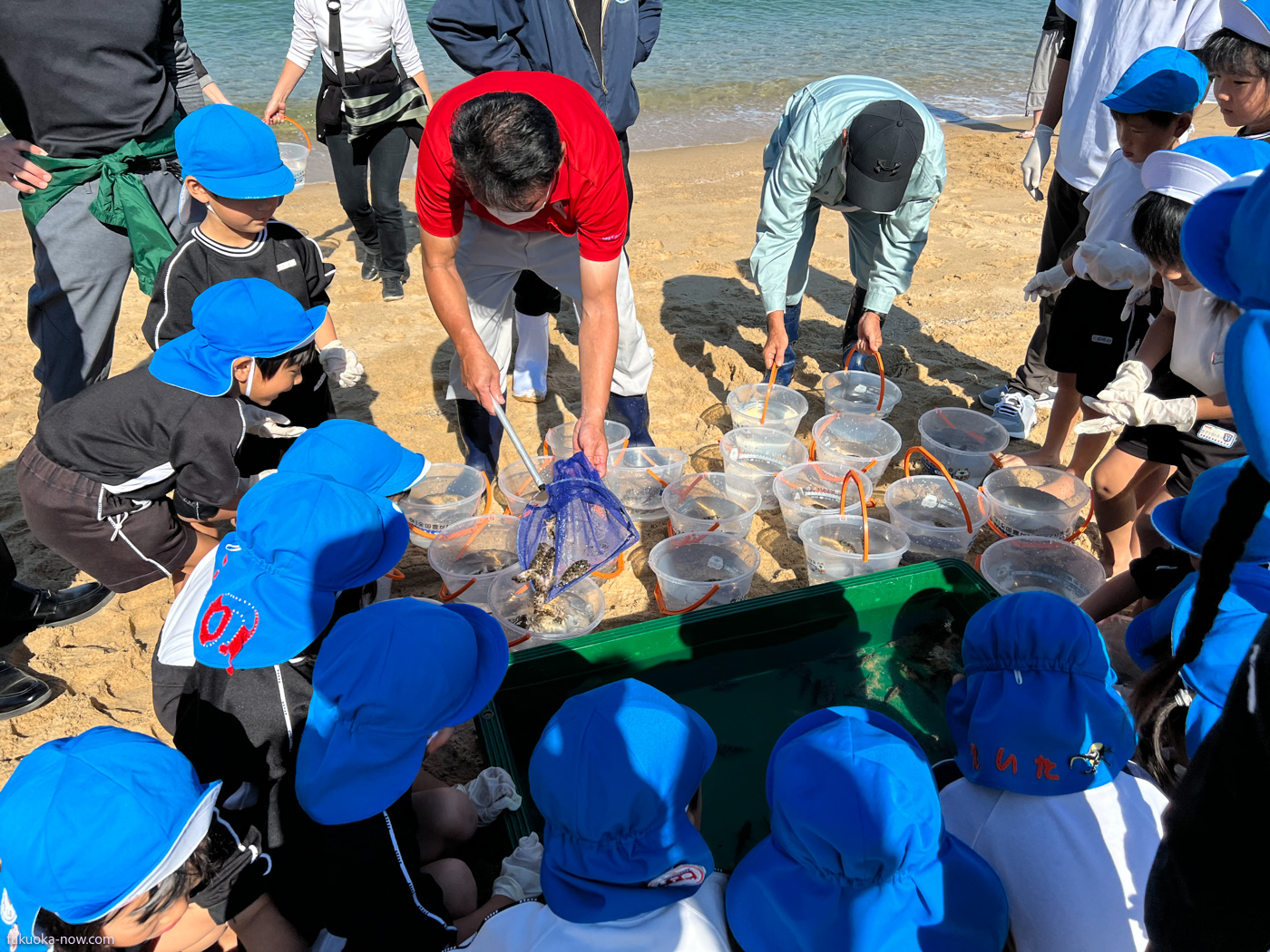 We live in an age where seafood is one of the few daily food items that we can experience in a truly organic fashion, that is, catching something alive in the wild and eating it without any additional processing. Local fish is one element that contributes to the richness of the environment, and it is a key concept for the future of Itoshima. 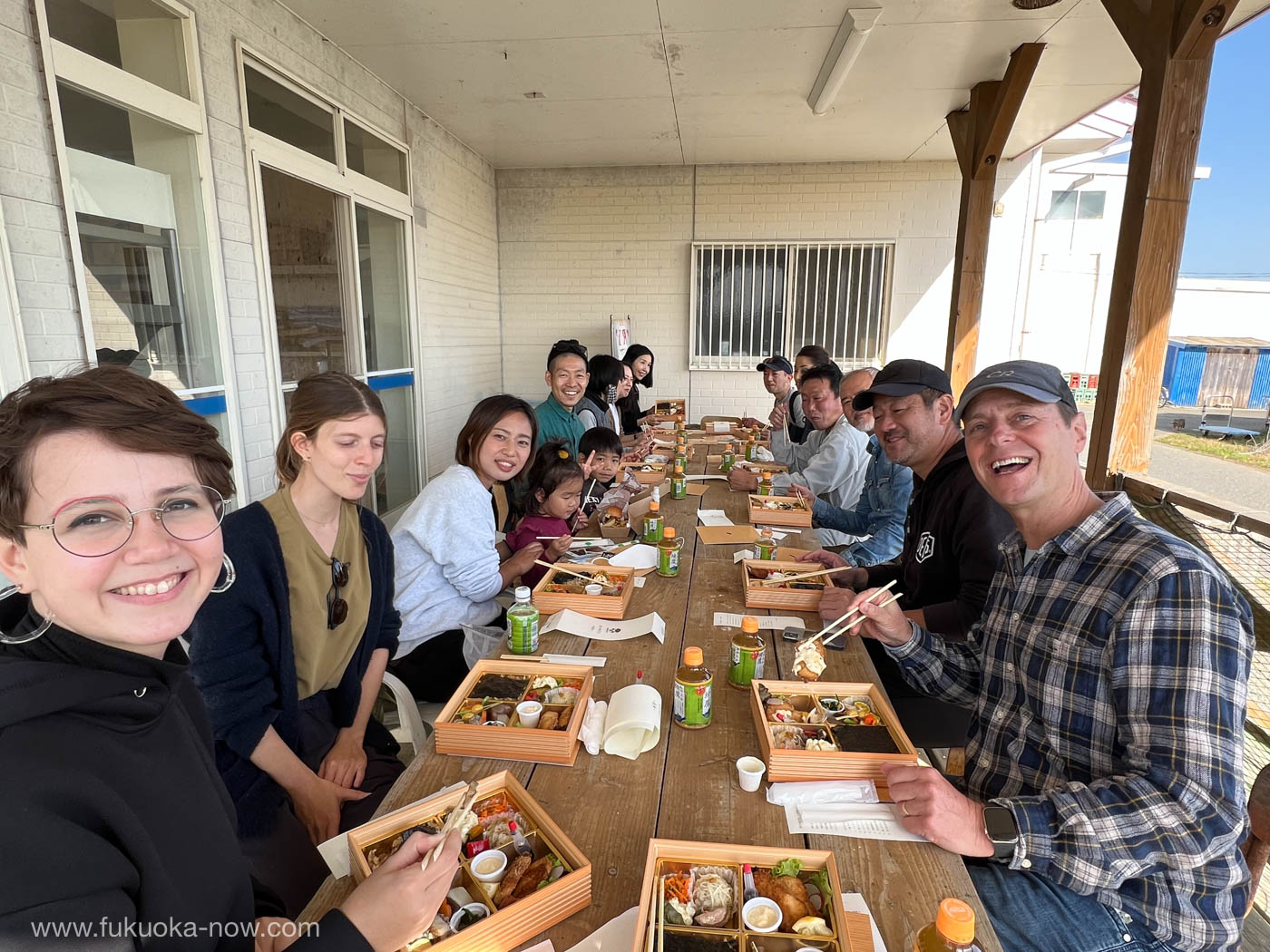 In Itoshima, there is a project called Jizakana Bank that aims to promote the sustainability of local fish by offering tours where people can cook and enjoy delicious local fish and seafood and learn about where and how it was caught. Perhaps one reason why Itoshima is attracting so much attention is because of this kind of community, where people can build connections with each other through food and take action that is considerate of the local community. 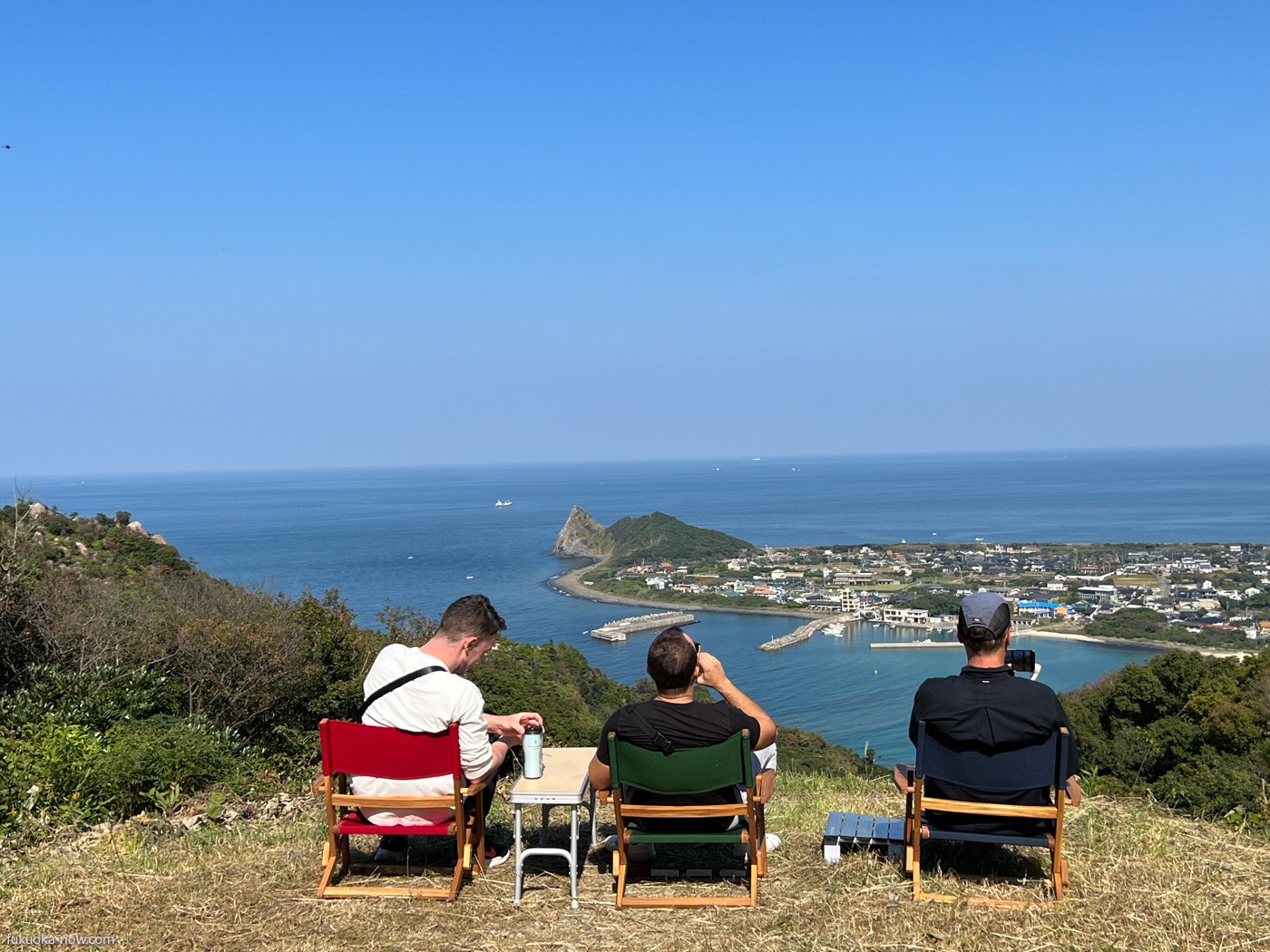